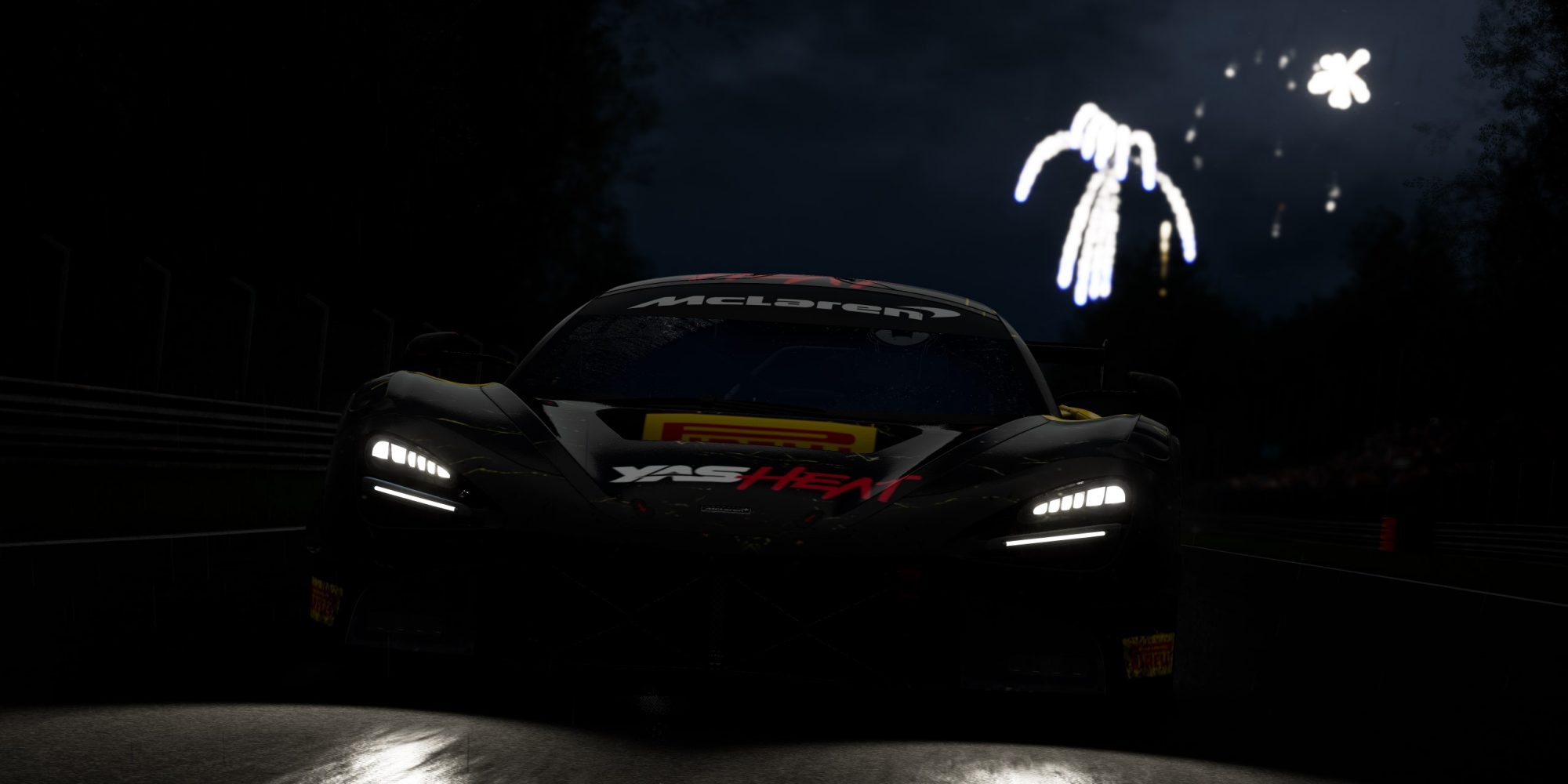 After a surprisingly dry inaugural round in Spa-Francorchamps, weather played a big part in Monza. Round 2 of Endurance Cup Season 4 provided a race with mixed conditions. With a cloudy sky above the track at the start, it did not take long before the rain started to fall and the drama to begin.

Unlike the first round, it has been a much more linear race for the two YAS HEAT entries, especially for YAS HEAT – Pirelli. Their leadership has never been in doubt throughout the entire race and resulted in the first win of the season for them.

Starting from pole position, James Baldwin chose the inside of Turn 1 to defend from YAS HEAT – Richard Mille. The two teams fell into the clutches of Jakob Ostermann, driving the RennWelten eSports – Orange #71 car. The Austrian racer managed to overtake Malinowski first and then Baldwin, with a nice move at Parabolica. As the rain started to fall, and teams switched to the wet tires, Baldwin took back the lead, diving down the inside of Ostermann in Lesmo 1.

From that moment onwards, no one could challenge McLaren #149. At the end of the 6 hours of racing James Baldwin, Eamonn Murphy and Mikhail Statsenko could celebrate the win by a comfortable margin. A much-needed success for the YAS HEAT team after ending in P7 at Spa.

The perfect day for the YAS HEAT team was completed by the #150 sister car coming home in second behind the winning McLaren #149. But it was not smooth sailing for Jaroslav Honzik, Maciej Malinowski and George Boothby.

In the early stages of the race, Malinowski was hit in the back heading towards Ascari by Savini of the Rebel Racing Team, while they were fighting for P3. The YAS HEAT Porsche did not lose much time, but fell down the order rejoining the track in P7. Malinowski was one of the first drivers to stop for wet tires and the choice paid its dividends. #150 came back in P3 once everyone else completed their tires changed.

With a bit less than 5 hours remaining on the race clock, Malinowski took advantage of a mistake by Ostermann in Lesmo 1 to regain P2, where he would stay until the chequered flag.

Completing the podium was the R8G eSports #9, currently leading the championship. Their gap in the standings could have been even larger, but penalties prevented them from challenging the two YAS HEAT cars at the front. After all, Dennis Schoeniger, Jordan Sherratt and Niklas Houben can still look at the bright side and head into the next races with a positive mindset. To finish in third with two drive-throughs and a 15 seconds penalty says it all about their pace

Talking about penalties, GTWR R8G Academy – Black had to serve a drive-through in the early stages of the race following contact in turn 1 between Simonini, Savini and Zholobov. Audi #457 came out of the pitlane way down the order, in P29.

Giorgio Simonini, Chris Harteveld and Andrea Capoccia did not give up and started their charge through the field. The squad came back inside the top 10 already two hours later, as Capoccia completed a double overtake in turn 1 on Martinez Maer and Seville. At the halfway mark, Audi #457 entered the top 5. An inspired Simonini got past Balzer of the Rutronik eRacing at Variante Roggia and, just three laps later, at the same corner, he took provisional P5 from Hettich, driving the #77 Prime eRacing. A drive-through penalty assigned to RennWelten #71 put GTWR R8G Academy in P4, completing their comeback.

The already mentioned Rutronik eRacing – Unicorns of Love Simracing squad has been another Audi team making an impressive recovery to the front of the field. Despite a poor qualifying, getting the 25th spot on the grid, #33 managed to stay away from chaos ahead, gaining several positions in the opening laps. Once established in the top-10, consistency in wet conditions was key to securing the 30 points guaranteed by P5. A promising sign for the remainder of the season, after finishing just in P19 at Spa.

RennWelten eSports #71 and #72 finished inside the top 10, respectively in P6 and P8 separated by the Prime eRacing #77. Both crews can leave Monza with a smile on their faces. But to think that #71 was in the lead of the race in the opening laps might leave some regrets to the Aston Martin squad.

Following a thrilling start, Jakob Ostermann put the car at the front of the field after qualifying in P4. Superior pace by the two YAS HEAT teams made the RennWelten entry slip to P3, though. During the second pit phase, Aston Martin #71 would lose two more spots, in favour of R8G eSports and Simware.Pro by VDES.

The latter would soon give back P4, though. Coming into Ascari, Egor Ogorodnikov found Lexus #349 facing the wrong way following a contact. Simware.Pro could do nothing to avoid the other car and picked up heavy damage, relegating the team down in P22.

RennWelten #71 continued to keep a top-5 spot for the majority of the race. Contact with a backmarker, though, would result in a drive-through penalty. Felix Ruppert found himself down in P6, a position he would keep until the chequered flag.

In just 21 days, teams and drivers of the Endurance Cup will be back on track. The championship will shift to France for the 6 hours of Paul Ricard, the last European round of Season 4.

Taking a look at the standings, R8G eSports #9, with its 86 points, has built a good 10 points gap to their closest competition, the YAS HEAT #149 squad. GTWR R8G Academy #457 and YAS HEAT #150 are tied at 74 points, however, as competition remains tight. The two RennWelten eSports are a little further behind, with 60 and 48 points, but with 18 hours of racing left in the championship, nothing has been decided yet.