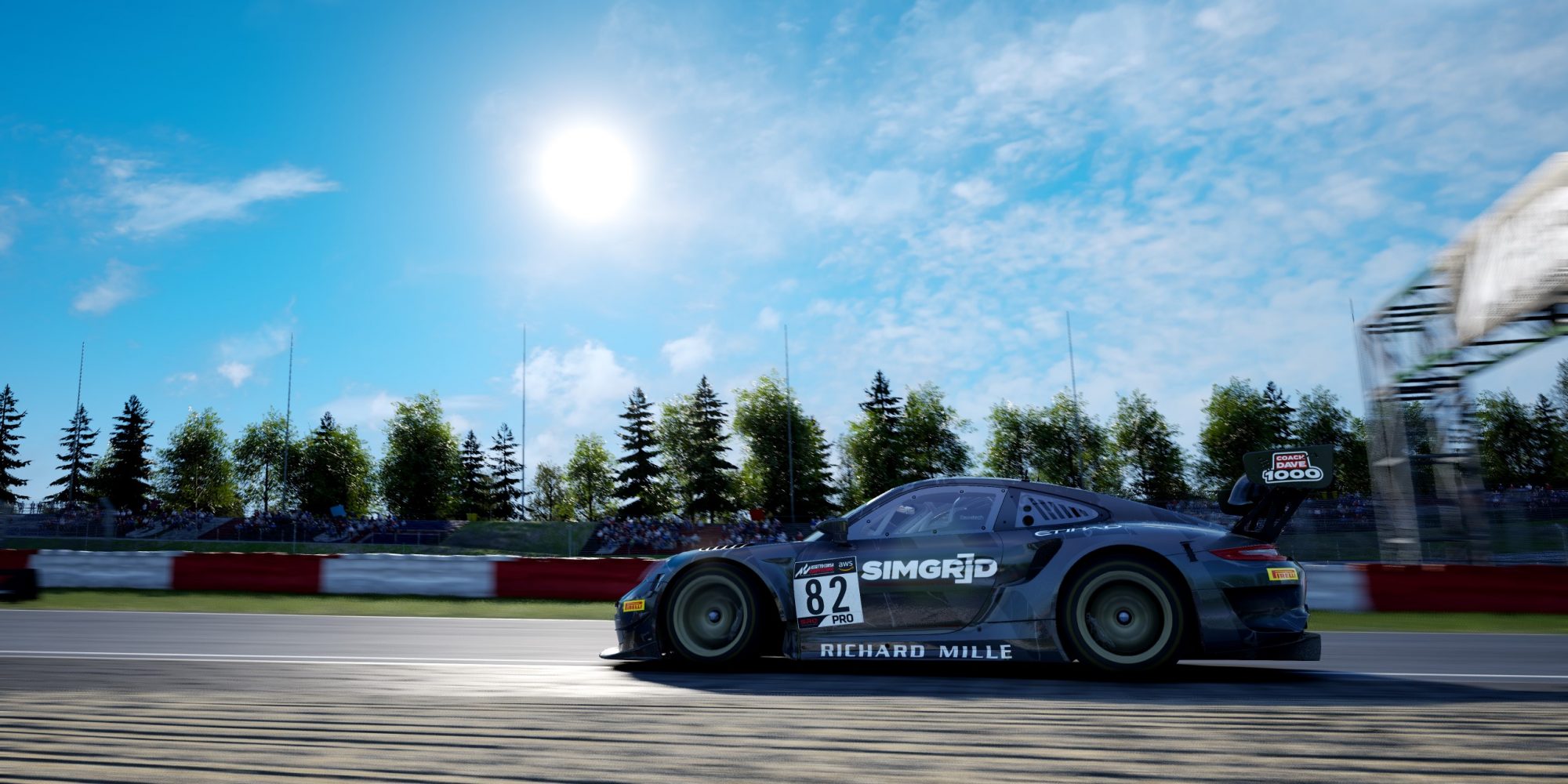 After two brilliant rounds of racing in the Coach Dave 1000, brought to you by Turn Racing, the calendar next summoned us to the German forests for 1000 kilometres of Nurburgring! With Williams Esports looking to be favourites after victory at Imola, their fortune would all turn around as their biggest rivals faced a hard afternoon of incidents are comeback moves.

YAS HEAT tie up a near faultless afternoon

Look, we don’t need to introduce you to YAS HEAT in the slightest. George Boothby, Maciej Malinowski and Jaroslav Honzik are absolute machines behind the wheel of their Porsche and Saturday’s 6-hour race was a testament to that. Once they were in the lead their victory never faced an attack, but they weren’t there all race long…

Qualifying on pole they were looking good – the Nurburgring is like a Porsche’s backyard. However, off the line, it was TF Racing Souvlaki that came in all guns blazing to the front after Nikos Chaldeakis looked to make the most of the team’s standout qualifying result. That lead wouldn’t last long though, as an error on the exit of the Warsteiner Kurve gave Boothby the only invitation to the lead he needed.

Come the first round of stops and YAS HEAT would drop to P3 after some perfect strategic calls from Williams Esports and Kkrammer Racing eSports that launched them ahead. Here they would stay for a little while, but Malinowski would eventually pass the other leading Porsche for second with a lovely little move.

YAS HEAT would later, to put it harshly, luck into the lead as Williams Esports suffered a heartbreaking disconnect. Not the way they would want to claim the lead, but with the Bentley looking rock solid we’re sure YAS HEAT wouldn’t have complained in the slightest. From then on, nothing would put a stop to their momentum as they cruised to victory, launching them into the championship fight.

Rollercoaster ride for the championship leaders

Williams Esports had a masterful start to their championship campaign in the Coach Dave 1000, taking a memorable victory at Barcelona and a hard-fought second at Imola. Qualifying 8th they were lower than they would have liked, but Tinko van der Velde wouldn’t stay there for long.

The Chillblast Bentley was hot out the blocks, launching themselves to fifth almost instantly, and right onto the leading train. Marco Bischoff from Kkrammer Racing eSports and FIA Formula 3 driver Alex Smolyar in the SMP Racing Esports car would be at each other’s throats, as van der Velde slipped into fourth. It was in the pits that they really came to the top, pulling off a perfect undercut to the lead and cementing themselves at the top.

Whilst they sat pretty at the top, main rivals Simware.Pro by VDES #41 had a long day ahead of them. Getting a shoulder barge from YAS HEAT on the first lap, they rejoined straight into the side of SMP Racing Esports, spinning themselves out and into the wall. Last place and a lengthy pitstop meant they’d fight from the back.

However almost halfway through the race and there were some key developments: Williams Esports disconnected from the lead and Simware.Pro closed in on the top 10. Suddenly YAS HEAT were the ones that were in prime position to claim the championship lead.

Simware.Pro #41’s pace was incredible though, fighting all the way to P4 by the flag, salvaging everything they could from what looked like a retirement on lap one. Their comeback would be tainted by some clumsy incidents though, throwing away that fourth place on the road to being fifth after penalties.

New challengers to the top of the standings

Whilst we usually focus our attention right at the top of the championship, there are some teams just slightly further back that have momentum aplenty, and the Nurburgring 1000 kept a lot of those names in the game.

Back at Imola we saw a beautiful drive from Jean Alesi Esports Academy Junior, who after finishing P7 at Barcelona would come home P2 to fire them to the upper quarter of the standings. Here at the Nurburgring, they wouldn’t quite be able to replicate such a result but a P10 finish would see them consolidate their position.

Meanwhile, the TF Racing Souvlaki trio of Nikos Chaldeakis, Konstantinos Kontogiannis and Giannis Chourdakis had a race that really put them back on the radar. After a difficult race at Barcelona and hovering in the midfield at Imola, round three was where it would all turn around. Second on the grid, leading the race for multiple laps and then taking the flag back in P2 meant they’re now seventh in the standings – will they become regular challengers?

Finally, Wild Things Racing put in yet another solid performance. Their dazzling blue and pink Bentley is becoming a regular car in and around the top ten; despite on the whole qualifying lower down the pack their race pace has been strong, and that was at the forefront at the Nurburgring. Starting outside the top ten, racing through the midfield with precision isn’t an easy thing to do, but it’s kind of becoming their thing.

Nurburgring is definitely a jewel in YAS HEAT’s crown; their victory has turned the tides in the championship and given them a boost in confidence sure to carry into Silverstone next month. The trio headed into the commentary box post-race to chat with our commentators Lewis McGlade and David Christie.

So you know how we said the trio’s afternoon was nearly faultless? Well, that one small issue they did have came at the courtesy of Boothby, who “took a bit of a detour” at the same place they passed TF Sport for the lead after they had made an error themselves. When asked about that though, the YAS HEAT driver said “nothing happened, I didn’t see anything!”, so let’s gloss over that one in the same fashion!

Honzik meanwhile had his own challenges, jumping into the super-competitive PESC All-Star Finale over on iRacing mid-race before jumping back into the leading car for the final stint – not something we’d want to do, that’s for sure.

Either way, his pace was certainly up to scratch on both platforms, although he wasn’t entirely happy, saying “I am usually very consistent but today with the Porsche it was a bit of a struggle”. We know that car is a tough one to keep on top of.

Malinowski was quietly confident about the rest of the season, although he and the team were expecting some kind of good result this time out, saying that “from the beginning of the championship, we knew that Nurburgring was going to be our strongest round”.

Maciej was keen to tell us that the team “can definitely fight for the top positions not only here but maybe at other tracks”, so expect more from the trio now second in the points standings as we head into the last two races.

After 3 rounds of the Coach Dave 1000, the next instalment of the series leads us to the United Kingdom on the 2nd of July for the Silverstone 1000. That means there won’t be just one world-class race at the historic British circuit in one weekend! Either way, this championship is hotting up. You aren’t going to want to miss a second of it.

If you want to get another dose of SimGrid GT3 cars before then, go and check out our Flickr gallery for the best shots from this round. And of course, make sure you check out the Coach Dave Academy store to get yourself all of the latest setups for both ACC and iRacing.

We’ll see you next round!