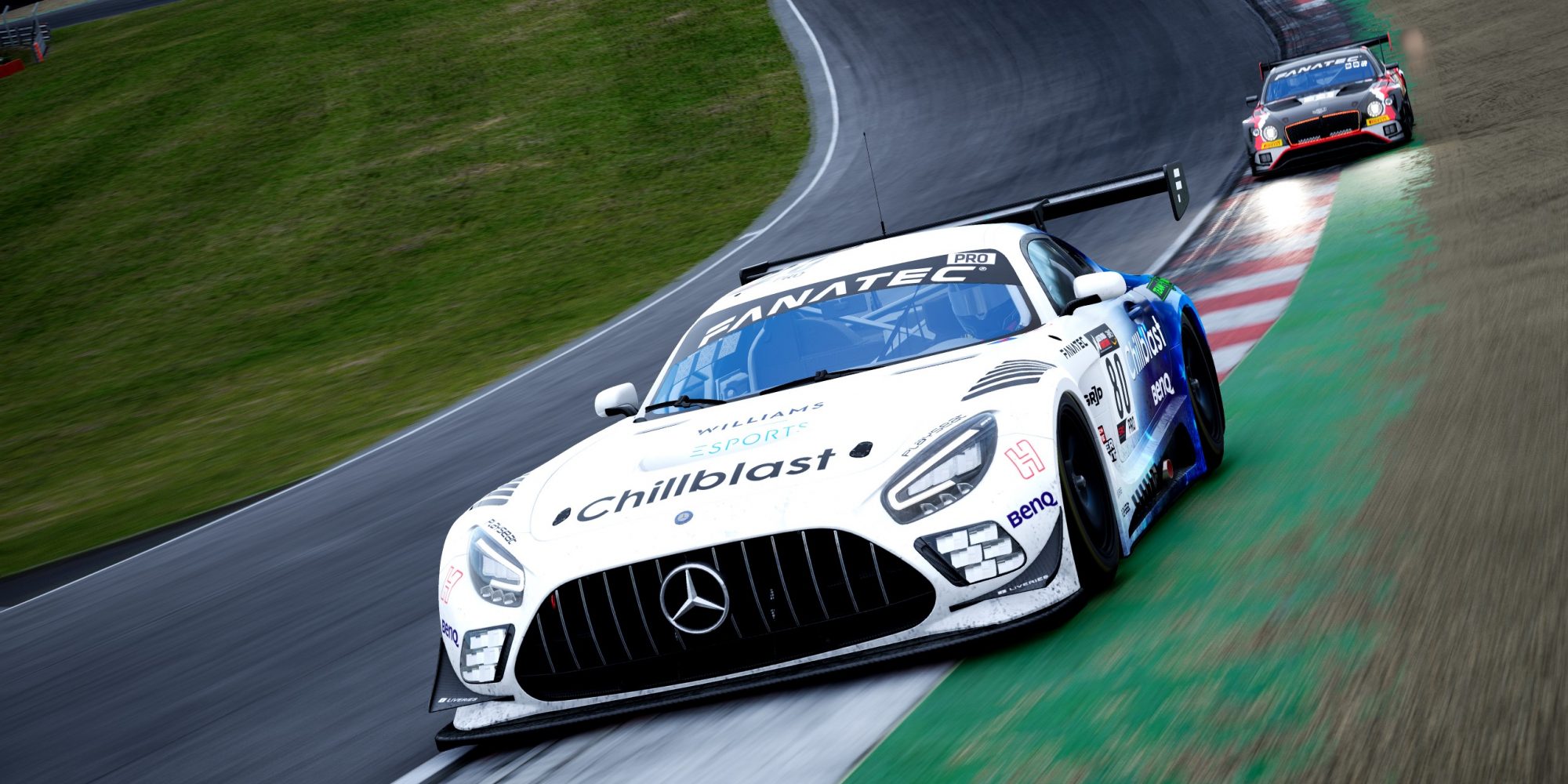 The Coach Dave Super Sprint kicked off in Brands Hatch on Thursday the 3rd of March. This new elite sprint racing series features a double-header for each round, with teams of two drivers challenging each other on track in two 60-minutes races. The season opener saw Williams Esports coming out on top of the overall standings by scoring two podiums. YAS HEAT – Richard Mille and Jardier Community are the teams claiming the first two wins of the championship.

YAS HEAT – Richard Mille #75 is the first race-winning team of the Coach Dave Super Sprint, thanks to a tremendous team effort. George Boothby knew the importance of track position at Brands Hatch and made a strong start from P4. Behind the wheel of his Ferrari, he gained a couple of places on the opening lap, overtaking Simracing Masterclass #777 and Williams Esports #80. By taking second place, the YAS HEAT crew started to chase down the Bentley driven by Alexander Novikov, ready to take any possible chances of overtaking.

And the occasion presented right after the end of the pit window. Jaroslav Honzik took control of the YAS HEAT Ferrari and immediately put some pressure on Mikhail Bykov in Turn 1 on the outside. Despite the fact that Honzik was not really trying to attack his rival, the two touched under braking. They both grazed the gravel with two wheels, and as they tried to retake control of their cars as soon as possible it was Honzik getting a better exit out of the corner to claim P1.

After this episode, things settled down at the front, with Honzik and Bykov never going back to fight for the lead. They just cruised to the chequered flag, with YAS HEAT securing the first win of the championship. Simware.Pro by VDES #42 ended in second place, ahead of the #80 Williams Esports of Daire McCormack and Tinko van der Velde.

Simware.Pro and YAS HEAT bring two cars within the top 10

Behind the podium positions there has been a close fight, with four cars separated by less than 3 seconds. The other Simware.Pro by VDES car (#41) led this group, preceding Griphax Engineering #49, Prime eRacing #77 and YAS HEAT Pirelli #449. In the final minutes of the race, Joonas Savolainen tried to put some pressure on Egor Ogorodnikov, but the latter managed to hold his nerve to keep P4, despite the huge train forming in the rearview mirrors of his Mercedes.

The action in the top-10 could have involved even more cars, but the first stint took away the chance from some competitive teams to reap the benefits of their strong pace. A contact between Eamonn Murphy and Zaahir Essa during the first lap put the Veloce #28 in the wall and the Simracing Masterclass at the back of the standings. #777 qualified in P2, but an unfortunate turn of events made Essa lose a lot of ground in the first sector of the track. Then, the collision with Murphy turned things from bad to worse and they finished in P30. A disappointing ending for them, after a promising qualifying.

Towards the midpoint of the race we lost another car in contention for a podium spot. What looks like a hardware issue sent Michal Nowakowski into the wall while he was fighting for P3 with the Williams entry. Nowakowski reported some severe damage to his McLaren 720S GT3, compromising the chances for a good result.

Another relevant DNF has been the one involving Samir Ibraimi of the RennWelten eSports – Red #72. Their retirement in the final minutes of Race 1, while running in P9, meant that the #62 BMW G2 Esports could claim the start from P1 in Race 2, as they gained a spot and entered the top 10.

The reversed grid for Race 2 provided some major changes at the front of the field and some teams made the most out of it. This has been the case for the #44 Jardier Community. After taking the first chequered flag of the evening in P9, Max Wojtyna and Valentin Barrier could benefit from a start in P2 and they definitely did. The duo managed to stay out of trouble, getting the full points in Race 2.

Race 1 front runners struggled in the second heat of the evening. After a positive first stint that took them from P10 to P2, Bykov lost control of his Bentley in Turn 1, hitting the barriers and falling down in P26. A drive-through penalty for exceeding track limits put an end to any chances of recovery.

It did not go any better to the YAS HEAT #75. When George Boothby was running in P4, with around 10 minutes left on the clock, he had a hardware failure and got stuck in second gear. A costly DNF for their title ambitions, but with many points still up for grabs they can look forward to the next rounds with optimism.

Out of the three cars on the podium in the first race, Williams Esports #80 had a clear shot for the win, but came up short. Despite taking the chequered flag in first, a 5 seconds penalty due to a collision with #41 on lap 21 gifted the win to the Jardier Community team. McCormack and van der Velde can smile anyway, as they leave Brands Hatch leading the championship.

The lowest step of the podium went to FFS Racing #123. Starting from P13, James Parker and Killian Ryan-Meenan pushed their Aston Martin to the limit to gain ten positions and claim P3, just ahead of the Simware.Pro by VDES #41, collecting another fourth place.

Veloce puts up impressive comeback, gets involved in midfield fights

During the opening lap there has been plenty of drama at the front. Car #91, driven by Sascha Glatter, went off at the Graham Hill Bend and while rejoining involved in a collision Joonas Savolainen (#49) and Felix Arndt (#77). The incident favoured the rise from the midfield of some teams. In five minutes, #42 went from P10 to P4 in an outstanding effort, putting their wheels right behind Charlie Crossland on the #62, Maciej Malinowski driving the #449 YAS HEAT in P2 and Wojtyna in P3.

With 45 minutes remaining on the clock, it looked like the fight for the win could have been an affair between #62 and #449, but a slight contact made Crossland fall down in P6. Malinowski took the lead, but would later be hit by a 15 seconds time penalty, which pushed #449 outside of the top 10 when Mikhail Statsenko jumped into the car.

Statsenko managed to recover some spots before the end of the race, thanks to a close fight that involved five cars, from P6 to P10. Leading the train was David Pertile on the QLASH Simracing Bentley #129. Pertile went wheel to wheel with Eamonn Murphy and the latter went on the grass, gifting P7 and P8 to KKrämer Racing eSports #977 and to R8G eSports #221. Murphy then had a dejavù: while attacking Houben, he once again touched the grass and had to give up another position, favouring Statsenko and having to settle for P10. An impressive result nonetheless, considering the fact that Veloce #28 started Race 2 from the last row of the field.

Despite missing the win, Williams Esports are now leading with 86 points, 6 more than Race 2 winners, Jardier Community. Simware.Pro by VDES #41 occupies third place, 14 points adrift of the lead. YAS HEAT #75 stands in P4 with the 51 points granted by Race-1 win. Rounding up the top-5 are BMW G2 Esports and FFS Racing tied at 50. In less than two weeks, on Thursday 17th of March, Coach Dave Super Sprint will head to Zandvoort for another exciting evening of racing.