Veloce and SMP take one race each in Barcelona, as Williams retakes championship lead 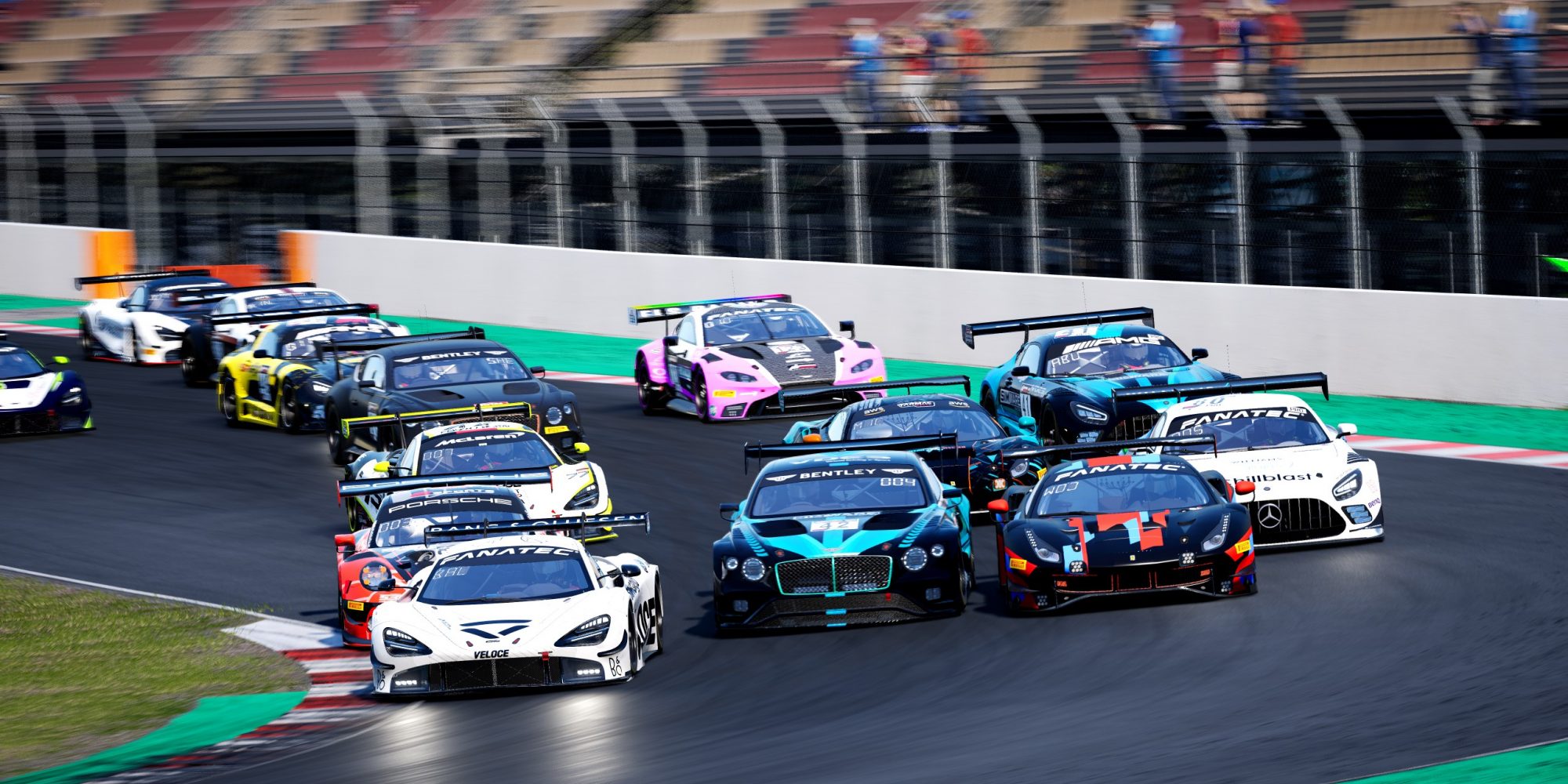 Six races, six different winners. The Coach Dave Super Sprint so far has been impossible to decipher, as it looks like every car on the grid could potentially be in contention for the win in every race. Of course, with now three rounds behind us, the standings are starting to refine and the third event in Barcelona definitely helped to shape them.

Veloce makes the best of their starting position in race 1

Despite the long start/finish straight, it has always been difficult to overtake other cars in the Circuit de Barcelona. Both in sim racing and motorsport, we have often seen teams and drivers capitalising from pole position on the Spanish track. And that is exactly what happened in race 1: James Baldwin got pole position with a 1.42.740 and drove an impeccable first stint. His teammate, Eamonn Murphy, was no less, bringing the car to the finish line in P1. A perfect race for the Veloce #28, capped off by the fastest lap of the session.

With this win, Veloce has become the fifth different team in five races to get on the top step of the podium. Also, it’s the first P1 by a McLaren: the English manufacturer joins Bentley, Ferrari, Mercedes-AMG and Porsche as race-winning cars in the Coach Dave Super Sprint. This is further evidence of the high competitiveness and of the unpredictability of the championship: so far there has not been a race in which the final standings could be predicted in advance.

Simware.Pro and Williams each get a double podium

The win by Veloce might have never been in discussion but behind them Simware.Pro #42 did a brilliant job in keeping it clean and getting a P2. After starting in P4, Novikov had a good start and went three wide in turn 1 with Jonas van Dreuten (KKrämer Racing eSports #977) and Max Wojtyna (YAS HEAT – Richard Mille #75). The latter had to cut the first chicane, but his Ferrari lost grip in the paved runoff area and spun around. Novikov was able to keep his Bentley on track, while van Dreuten lost the position to Daire McCormack in the Williams Esports machine as well.

McCormack could not keep the pace of Alexander Novikov in front, but kept the car in P3 and handed it to his teammate Tinko van der Velde. The latter brought the car home in P3, but it has not been as easy as one might think. In the final minutes of the race, Oleg Kamenev (SMP Racing Esports #81) and van Dreuten’s teammate, Marco Bischoff, put some pressure on the Mercedes #80, but van der Velde did a great job in keeping them at bay.

Simware.Pro and Williams Esports shared a common destiny in round 3 of the Coach Dave Super Sprint. Both teams got the same results from each race, meaning that they repeated their final position in the first heat in the second race of the evening, ending respectively in P2 and P3. Of course, the reversed top-10 grid made things harder for them, but they managed to overcome it and could be declared the true winners of the evening.

SMP Racing gets their maiden win in race 2

Did race 2 have the same podium as round one? No, because SMP Racing #919 had something to say about that. After taking the first chequered flag of the evening in P9, Igor Murdasov and Oleg Zhobolov had a better start in race 2 compared to the Volante Racing #70 that started on pole. That overtake, along with strong pace and perfect management, they basically gifted themselves their first win of the season.

The victory will definitely be a good confidence booster for them: in the first two rounds, the duo only managed to gather 2 points, while in Spain they had 73 of them. It might be a bit late to join the title fight, but they will definitely be one team to watch in the final few rounds. The sister team, SMP Racing #81, showcased its potential as well. They took the flag in second completing a 1-2, which was later taken away by a 15 seconds penalty. They were relegated down in P5, only 37 thousandths of a second behind Volante Racing.

In the round 2 report, we mentioned how consistency had been a key to the success of Simware.Pro #41. Egor Ogorodnikov and Vyacheslav Abuladze never won a race, but by keeping their Mercedes at the front of the field, they managed to get in the lead of the championship. Unfortunately for them, though, things have been very different in round 3 at Barcelona.

It all started off in race 1 with a mistake under braking: coming into the slow hairpin in sector 2, Abuladze could not stop his Mercedes in time. He tried to avoid the car in front, driven by Michel, but his evasive manoeuvre ended in disaster, as he hit the McLaren #77 of Arndt in the back. The time lost in the accident and a 15 seconds penalty put the team down in P20, giving them only one point. Things went from bad to worse in race 2, as another penalty and a difficult starting position made the #41 come home only in P24.

Coming into round 3, the closest rivals of Simware.Pro were the two YAS HEAT cars. They both struggled though, being quite unlucky. #449 suffered from a connection loss in race 1 and in race 2, Maciej Malinowski and Mikhail Statsenko saved what they could by grabbing that final spot inside the top 10.

The #75 YAS HEAT Ferrari didn’t have a much better race, either. As we mentioned, Wojtyna found himself facing the wrong way and only a simply epic comeback from himself and George Boothby to take P11. This gave them a good starting place in race 2, but a second lap incident involving themselves and Veloce meant they would finish P12 and P17 respectively.

Williams Esports in the lead ahead of the two YAS HEAT, Simware.Pro keeps title hopes alive

The damage limitation paid its dividends for YAS HEAT, as previous leaders of the standings, Simware.Pro, struggled. The two cars are now in P2 and P3, with the #75 at 151 points and the #449 just 10 points behind. Ahead of them, the new leaders Williams Esports are on 158 points –  they took back the lead after they lost it in a difficult round at Zandvoort, thanks to their double podium.

Aside from these three entries, it looks like the only two other teams which could fight for the championship crown are the two Simware.Pro cars. But, with six teams so far proving able to win a race, you might never tell what will happen in the upcoming rounds. To make things even more exciting, in two weeks teams and drivers of the Coach Dave Super Sprint will face the challenge of Bathurst.