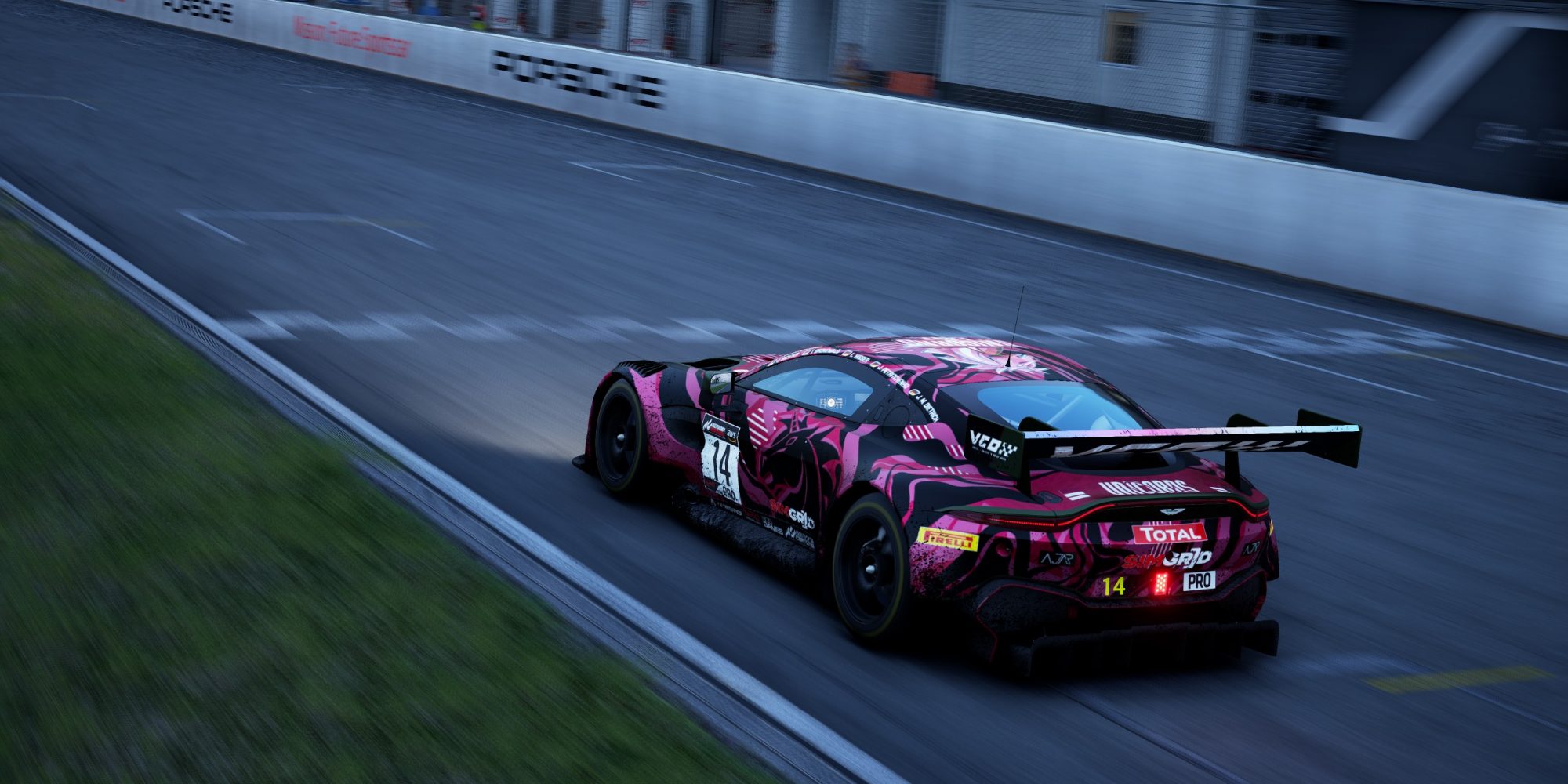 The SimGrid x VCO World Cup finale saw our teams head to the Nurburgring for a 24 hour battle around the grand prix circuit. Heading into the event, Simware.pro arrived with a substantial 46-point advantage in the championship standings. However, qualifying didn’t go exactly to plan for the Russian squad, giving the DV1 Triton Racing team the chance to pull off an epic turnaround. Here’s how the race – and the title fight – panned out:

The drivers were greeted with heavy rain as the race got underway, but luckily the run into the first bend wasn’t as chaotic as it possibly could have been. Tobias Gronewald managed to pass the #22 Rocket Simsport McLaren for third place, which would effectively hand him the lead as the two leaders on the road had been dealt stop-go penalties for misdemeanours at the previous round. Indeed, the pole-sitting #157 GTWR R8G Academy Audi and the second-placed #21 R8 LMS of WPS Racing Team would serve their penalties over the course of the next couple of laps, therefore maximising the amount of time they had to recover back up the order.

Meanwhile, the points-leading #41 Simware.Pro car was making swift progress. Having qualified down in eighteenth compared to seventh for the #111 entry, the championship points leaders had some work to do if they wanted to make sure of title glory. Alexander Smolyar wasted no time in climbing up into the top ten, before Simware.pro was handed a gift. Dominik Blajer spun completely unaided by anybody else at turn six, and with that, DV1 Triton Racing plummeted down to thirteenth – promoting their rivals up to ninth in the process.

After less than an hour of racing, Smolyar did the unthinkable and climbed up into the podium places following a tidy overtake on the #720 Carbon Simsport McLaren (which at this stage was having its best performance of the season). The #111, on the other hand, was staunchly defending eighth. Already, it seemed as though Simware.pro was tightening their stranglehold on the championship.

How the battle continued as the first hours pass

With two and a half hours gone, Jordan Sherratt moved up into tenth position in the #157 GTWR Audi. Proving that their pole-winning pace wasn’t a fluke, the team had made a fast recovery following their earlier stop-go penalty, and at this rate of performance had put themselves back into contention for the race win.

Eventually, the #111 DV1 Triton Bentley got into a groove, and soon enough Blajer executed a sublime double overtake at the exit of the Mercedes-Benz Arena to snatch fifth from the battling #44 RevolutionSimRacing and #125 Real Racing Club Aston Martins. Shortly afterwards though, Blajer’s attention would be turned from attack to defence. Tobias Pfeffer was the quickest driver on track in the #157 Audi, and having also dispatched with Michael Mros and Eric Nieth, he was soon reeling in the #111 Bentley. In the end, Blajer decided that it was best to play it safe on this occasion, and chose to let Pfeffer by at the chicane without much fuss.

Just as the race was beginning to settle down, the weather then threw everybody a curveball. The wet conditions were set to ease up and dry out just after the second pit stop phase of the race, giving everybody a tricky decision to make about tyre choice. In the end, most of the leading pack would swap over to slicks, apart from the hard-charging #157 Audi. This gamble wouldn’t quite pay off though, as the team soon had no choice but to switch to the slick compound as conditions improved, dropping them back to eighth.

As afternoon turned to evening, the rainfall returned. For a handful of laps, it looked as though the leading #14 Unicorns of Love car was going to brave it out on slicks, but soon enough common sense prevailed and Jura Petritchenko joined everybody else on wets. Smolyar, meanwhile, was catching Blajer by around half a second per lap. It looked as though a titanic battle was about to erupt, but then the #111 Bentley got severely held up by a backmarker at turn two, allowing the #41 Aston Martin to saunter past for third place.

Elsewhere on track, Rocket Simsport had begun their redemption arc. The team had fallen to as low as nineteenth earlier on in the race after a host of mishaps, including a spectacular crash involving the #125 Real Racing Club and #35 Zennith Esports Aston Martins along the start-finish straight. Nevertheless, they were now up to an impressive sixth position. In fact, the #21 Audi, #995 RennWelten Ambassadors Vantage and the #5 Williams Esports team were on a similar trajectory. All of these teams had suffered various woes in the opening hours but now had fought their way back into the top ten.

Smolyar then took to the pit lane from third place, attempting to make up time on fresh tyres with the undercut strategy. However, something must have gone awry, as when the #111 Bentley emerged from their pit stop a lap later, Blajer had jumped Grabovskii for third. The #41 Simware.Pro team continued to lose time to the #111 DV1 Triton Racing squad as the race progressed, but then it was all change again in the pits. A two minute stop including a change of brake pads meant that DV1 Triton Racing fell from third to fifth. However, the team wasn’t too concerned as they expected their rivals to have to do the same later on.

Racing towards the halfway point

As the race moved deep into the night and towards the halfway point the battles continued to heat up.

The most intense battle of this period was for 6th place between the #22 Rocket Simsport and #5 Williams Esports teams. The #41 Simware.Pro Aston looks to be on for their best result of the season but the #22 Mclaren was sure to try and make that a difficult task. There were many times they swapped positions as backmarker traffic spiced things up. However, in the end, the extra confidence the #22 Mclaren had through the corners in wet gave them the upper hand to take 6th place.

The battle for first also raged on with the #149 YAS HEAT Mclaren piloted by Baldwin quickly hunting down Gronewald in the #14 Unicorns of Love  Aston. At the end of Baldwin’s stint, he managed to get the gap down to 11 seconds as they swapped drivers for Honzik who looked to take the team closer to the lead #14 Unicorns Of Love Aston.

The two championship contenders made sure to keep the entertainment coming with a tight battle for 4th spot. The #111 DV1 Triton Racing Bentley held the advantage at this point with the #41 Simware.Pro Aston hunting the team down. The #41 Aston didn’t quite have enough time before their next pit to get it done the first time but as we approached the halfway mark, and mid-way points being dished out Smolyar in the #41 Simware.Pro Aston got the pass done relieving more pressure on their championship fight.

Throughout the night there were a number of winners and losers in the changeable conditions. One team that may not be in the championship fight due to an early disconnect but making astonishing progress through the field is the #62 BMW G2 Esports team. Early in the race #62 BMW G2 Esport found themselves at the back but now had progressed up all the way into the top 20 – a drive that is one to definitely take note of as they showed their ability to perform an astonishing recovery drive.

The battle at the top of the field didn’t let up through the night either. The back and forth that the #22 Rocket Simsport Mclaren and #5 Williams Esports Aston had earlier in the race eventually swung to the #5 Aston Martin, with them securing 6th place and pulling out a healthy gap.

Another key area to note was that the #157 GTWR R8G Academy Audi and #41 Simware.Pro Aston made their way back onto the lead lap, ensuring that if the #14 Unicorns of Love squad or #149 YAS HEAT Mclaren makes any slip up they were there to pounce and capitalize.

The changeable conditions and darkness through the night settled some of those tough battles seen in the first half of the race. However, as the rain returned in the morning, there was still plenty more to come from the World Cup finale.

As the morning breaks

Throughout the morning, drivers began to get more aggressive as those with less to lose began to try to make moves to salvage a good result from the final race of the season. One of the battles to note was with the #129 QLASH Simracing Aston and #32 GTWR R8G Academy Ferrari racing for 24th place. The #129 car made a great dive into the final chicane getting the move done before the start-finish straight. This showed that even the lower spots in split 1 are full of world-class sim racers.

The battle for the lead continued to ebb and flow as the #14 Unicorns of Love Aston had increased their gap back to around 17 seconds overnight, but the #149 YAS HEAT Mclaren began to chip away slowly. The gap came down to 7 seconds with Baldwin at the wheel of the #149 Mclaren, but they couldn’t quite get close enough to ever make a move.

As the final hours start to draw to a close the winners and losers of the season started to emerge.

Looking at the final hours, there was no team more unfortunate than the #62 BMW G2 Esports. Just as before, a technical issue struck the team and the car disconnected from the race. The team had made a great recovery drive up to 15th place before the issue reared its ugly head again. To their testament, the team reconnected and finished the race showing their perseverance once again.

The championship contenders held station in their position coming to the end of the race. The #111 Bentley picked up a heap of pace in the dry which was enough to keep the #41 Aston behind, but despite this, the points gap wasn’t enough for the #111 DV1 Triton Racing to take the championship. A 5th place finish brought the #41 Simware.Pro team to championship victory and the elation begun!

The lead of the race also held station, with the top 3 staying the same as it had for most of the race. The #157 GTWR R8G Academy Audi came home in the third spot, despite a late charge from the #111 getting within 7 seconds. Then the top two continued their battle with Baldwin back in the #149 Mclaren to try and chase down Petritchenko #14 but to no avail. Unicorns of Love took top honours after a long 24 hours of action – redemption for when their lead was ripped away by a disconnect at Kyalami.

End of the season

The final race was definitely one that tested all of the teams with the changeable conditions, but one thing is for sure, we definitely saw all the teams give it their all.

As the season comes to a close, it has definitely been one with twists and turns. From race one, no one could have predicted the end result but that’s what makes The SimGrid x VCO World Cup such a great event. As with every season, the dedication from all the drivers and teams are what make the events so great to watch for all and is sure to continue across our events. If you are looking for more racing content to enjoy check out The Sim Grid Calendar for all the upcoming events or subscribe to the YouTube channel to get notified of all upcoming live streams.