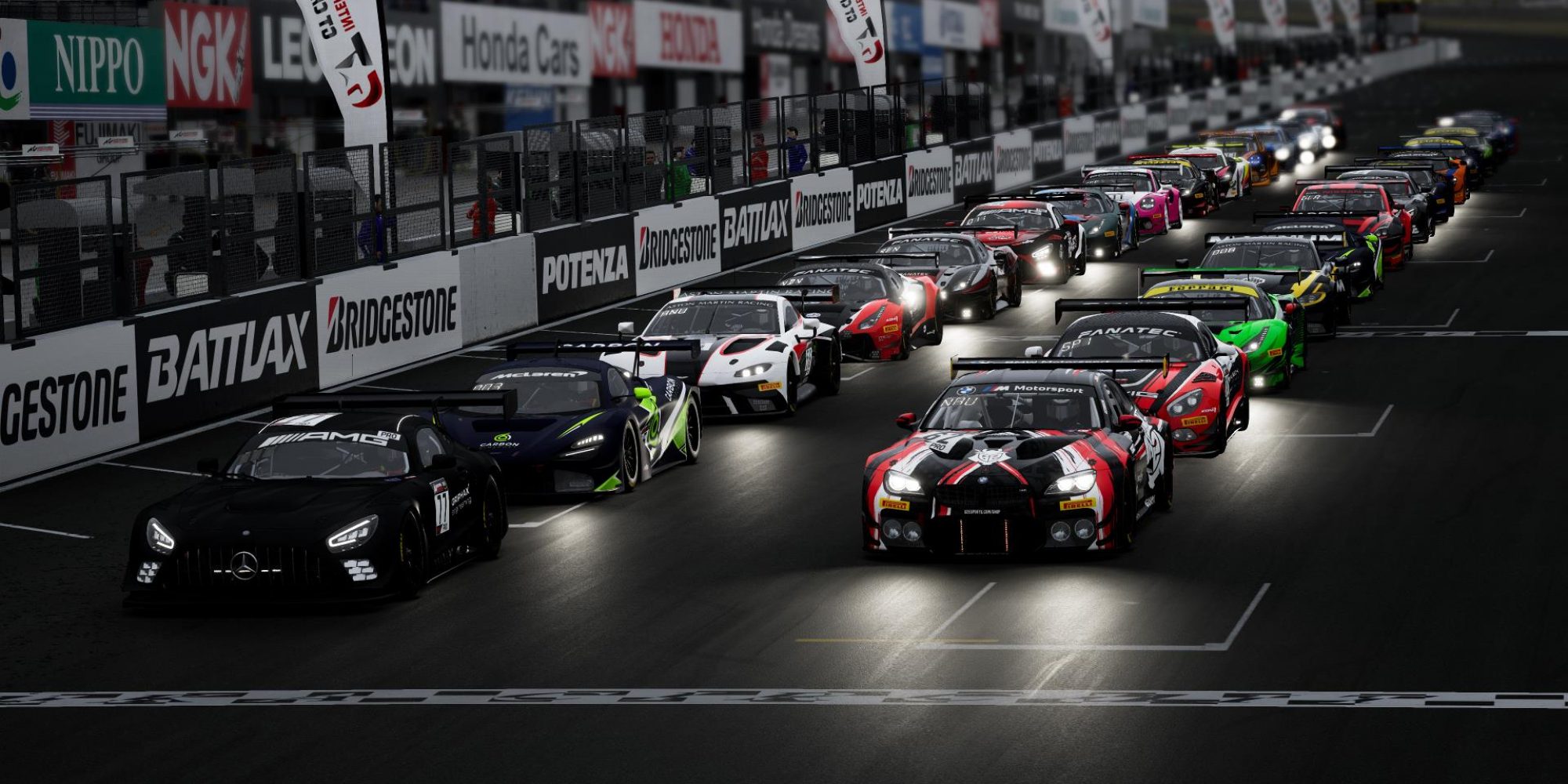 Season 3 of SimGrid’s Sprint Cup was nothing short of spectacular. Each race saw tight wheel to wheel action, with some of the best sim racers from around the globe fighting tooth and nail in their battle towards the top. However, one team would rise as the class act of the field. With a new season of the Sprint Cup on the horizon, in this article, we look at Season 3 in retrospect.

BMW Team G2 Esports almost immediately established themselves as potential title contenders, even as early as their Sprint Cup debut at a rain-soaked Snetterton. The team claimed pole position, and even though they were caught up in the lap one carnage and faced a challenge for the race lead, the BMW M6 GT3 piloted by Nils Najouks and Arthur Krammerer took a dominant victory.

The #699 Send It Racing Mercedes placed second, driven by James Parker and Charlie Crossland, having dropped to fourth place as a result of the first lap carnage, before fighting their way into the podium places. The #404 H3 Racing Ferrari of Luke Whitehead and Hamada Erquizi placed second, having put on an incredible performance, flying through the field from a lowly starting position of 17th on the grid – a performance that the team would put on more than once throughout the season.

Perhaps slightly unexpectedly, the #92 Tauro McLaren from Alleric Enslin and Amir Hosseini would come out on top at Misano. Having missed the first round at Snetterton, the team qualified seventh for their Sprint Cup debut. However, the team were able to use their overtaking skills to make their way to the front and, coupled with their ability to capitalise on the mistakes of other drivers as well as their technical issues, they eventually found themselves in the lead of the race, and would go on to take the checkered flag with a comfortable lead.

The second podium place would go to the UKOG47 McLaren piloted by George Boothby and Niels van de Koekelt, who had to fight through the field from 8th place after being caught up in an early incident. Rounding off the podium once again was the H3 Racing Ferrari of Luke Whitehead and Hamada Erquizi, putting on another spectacular performance, driving from 11th on the grid to a final finishing position of P3.

G2 Esports, despite being so dominant in the opening round, had a more than a lacklustre race, starting from deep in the field after a poor qualifying and being tipped into a spin during the race, eventually finishing 24th. A similar fate would befall the #699 Send It Racing team, who placed second at Snetterton. Starting in 12th place, they would be caught up in a first-lap incident and would go on to 27th. These up and down performances would go on to shape the championship.

BMW G2 Esports returned to their winning ways at Imola, with Nils Naujoks and Arthur Kammerer starting from pole position and driving to a convincing victory, essentially unchallenged for the entire race and retaking the championship lead. Send It Racing took yet another second place, after fighting it out with the #14 Unicorns of Love Mercedes of Lars Kisser and Tobias Gronewald (who had missed the first two rounds of the championship), allowing for them to once again consolidate second place in the championship.

Unfortunately, after two strong recovery drives, resulting in 3rd place on both occasions, the H3 Racing Ferrari failed to finish, retiring from the race as a result of a crash. As a result, they dropped out of 1st in the championship. A similar fate would befall the #92 Tauro McLaren, which was destroyed during a high-speed incident.

The championship battle continued to intensify heading into the second half of the season. Despite playing little part in the championship hunt, having missed the first round and crashing out in Imola, #92 Tauro McLaren took their second victory of the season, getting the jump from second to first at the green flag and staying there until the checkered flag.

The #25 Carbon Simsport McLaren of Michal Nowakowski and Nik Babin, made their way onto the podium for the first time in season three, with a strong second place after losing the lead at the start of the race and winning out in a wheel to wheel battle with the H3 Racing and the #10 Omega E-Racing Team Ferraris.

Another first-time podium scorer, the #77 Griphax Engineering Mercedes of Joonas Savolainen and Jesse Kauppinen, managed to finish 3rd, who had managed to challenge the Carbon Simsport team in the closing stages but eventually had to settle for the third step of the podium.

The main championship contenders, G2 Esports and Send It Racing, also had fairly lacklustre races, struggling due to their success ballast. H3 Racing, with a solid 4th place in Hungary, managed to reclaim the championship lead. The #16 Excel Racing by RennWelten Ferrari of Maximilian Wohlmuth and Felix Ruppert claimed a sold 5th place finish and, having claimed some solid top 10 finishes already, managed to propel themselves into the championship fight.

While they failed to finish the first race of the season and missed the round at the Hungaroring, when the #47 UKOG47 McLaren lineup were able to score points, they always managed a good result, having claimed 6th place at Imola and 2nd place at Misano. However, at Zolder, they claimed their greatest haul of points yet, winning the race as George Boothby and Niels van de Koelkelt were able to use the changeable weather conditions to their advantage, landing 4th place in the championship.

These conditions would wreak havoc up and down the field, as there was split opinion on which tyres would work best on the damp track. Zolder is, at the best of times, a tough track due to its tight nature and punishing track limits, so adding the rain into the mix, and we had mayhem. Harry Spiers in the #285 Mercedes took a shock pole position and would act as a roadblock in the early part of the race, allowing for many teams to get involved as the pit stops came around. Most notably, TF Racing took a standout podium as they picked up the pieces from the tyre fallout.

Finishing 2nd, G2 Esports were able to reclaim the lead of the championship, with the H3 Racing Ferrari finishing 22nd after a mistake when it came to tyre choice – dropping back to 5th in the standings. Meanwhile, Send It Racing finished 14th, as their strong championship challenge continued to fall apart. Excel Racing by RennWelten further solidified their position in the championship hunt, however, they still had a lot of work to do going into the final race at Suzuka.

The championship would be decided at the final race at Suzuka, with the fight set to be between the #62 BMW Team G2 Esports of Nils Najouks and Arthur Kammerer and the #16 Excel Racing by RennWelten of Felix Ruppert and Tom Reiher, who was standing in for Max Wohlmuth.

The Excel Racing team would be on the back foot, with an 18 point gap separating them and the top of the standings. However, their chances appeared even worse after qualifying 16th, with the leading G2 car starting 2nd. Despite the darkened skies hanging over Suzuka, it seemed that the sun continued to shine on G2, leaving the Ferrari team in the shadows and in the midst of the degna pile-up on lap 1, leaving them in 24th and virtually bringing an end to their championship challenge.

All G2 had to do now was drive carefully and finish the race. This allowed the #77 Griphax Engineering Mercedes of Savolainen and Kauppinen to gain an extraordinary lead in the opening stages of the race, rendering them almost untouchable.

Meanwhile, Luke Whitehead who was driving solo for H3 Racing was lighting up the track, fighting his way from 17th to an eventual 8th place – the highlight of which was a battle with the #81 Black Hawk Racing Nissan GTR, driven at the time by Chris Severt.

Ruppert and Reiher put on a similar performance, recovering well from their crash to a final finishing position of 13th. After a dominant performance, the Griphax Mercedes crossed the line to take their first victory of the season, claiming 2nd the championship. However, crossing the line in 2nd was G2 Esports, claiming championship honours along with it, concluding a truly superb season for the team.

The end of season three

While they had a couple of ups and downs, BMW Team G2 Esports were in a class of their own. They were the only team on the grid to score more than two podiums, winning two races and taking two additional 2nd places. This will certainly set a new standard for championship performances in the Sprint Cup.

While G2 were almost totally dominant, season three did highlight the impressive performances of other teams such as H3 Racing, UKOG47, Tauro, Excel Racing by RennWelten, Griphax Engineering and SideMax Motorworks, who could all be forces to reckon with in seasons to come.

Season 3 produced some incredible sim racing, highlighting once again the calibre of SimGrid’s talent pool. If this is anything to go by, then Season 4 should be nothing short of a classic.