Simware.Pro fend off Williams Esports to open their Coach Dave 1000 campaign with a bang 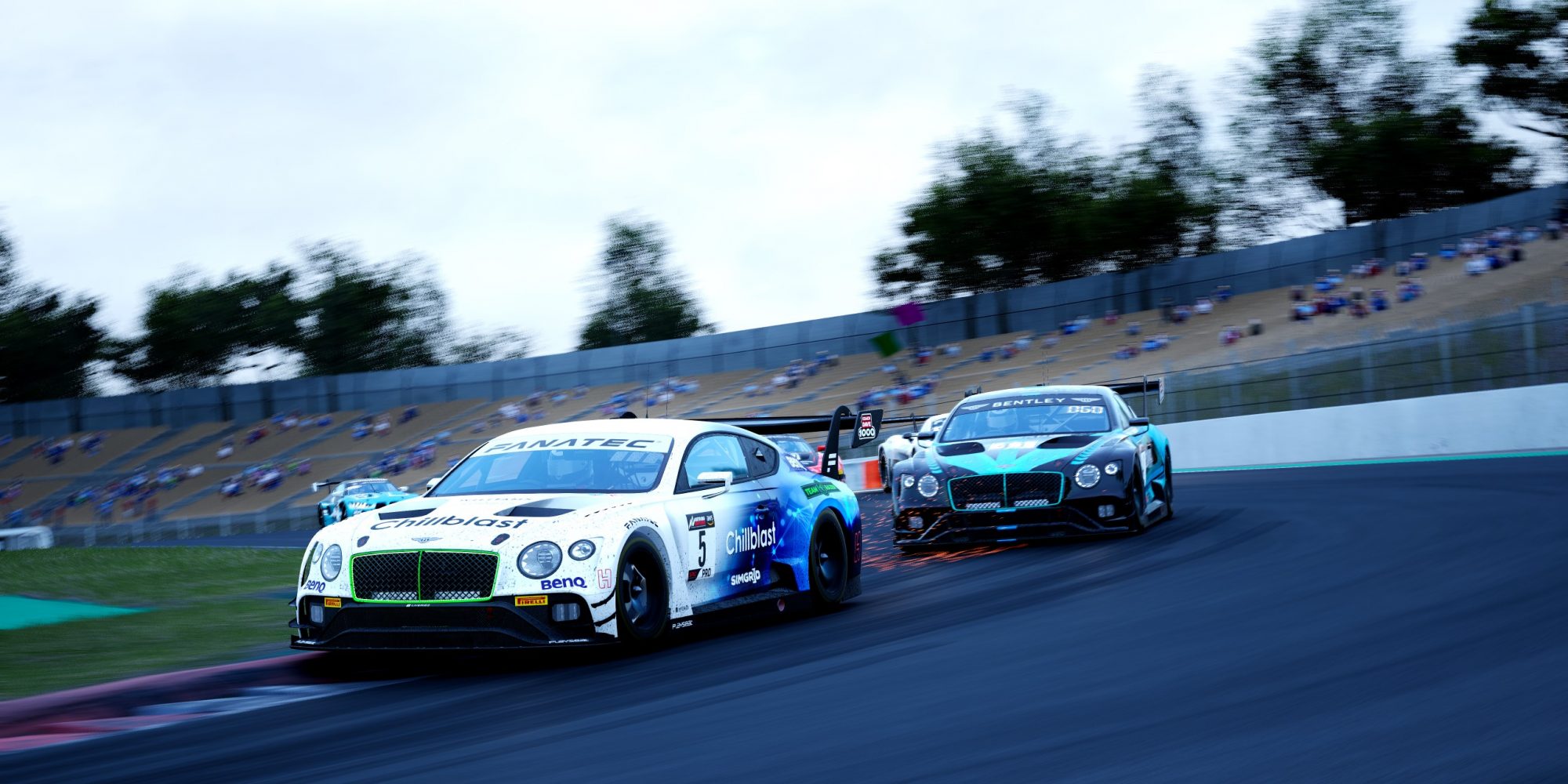 The much-anticipated Coach Dave 1000 got underway on Saturday afternoon at a cloudy Barcelona. 1000 kilometres, amassing 6 hours of action, lay ahead of the 47 teams and drivers taking to the Spanish track. With a prize pool of up to $3000 for the top split and the biggest names in Esports lining up, it was time to go racing!

The Simware.Pro by VDES trio took the checkered flag with a 10-second margin; sounds like domination, right? Well, it was far from it in reality, especially after qualifying where the top three were less than a tenth apart.

Starting the race second, Egor Ogorodnikov was first to take the helm of the light blue Simware.Pro Bentley. Lining up alongside James Baldwin in the Veloce McLaren, his Bentley, in true front-engined fashion, was hot out the blocks as he looked to blast to the lead but in fact, it wasn’t he nor Baldwin who’d lead after turn one. Daire McCormack would sweep right around the outside of both to take the lead in turn one, a fantastic move by the Williams Esports driver that would set the tone for the rest of the race.

After the opening laps allowed the top three to settle into a rhythm, Williams Esports, Simware.Pro and Veloce all sat nose to tail. The top two went for the odd back and forth, but Simware.Pro lost out heavily in the first round of stops. In fact, they wouldn’t be able to challenge for the lead in stint two either, instead, needing to re-pass the Veloce McLaren.

Pitstop masterpieces are what really earned them the victory in the end, as their third and fourth pitstops really put them in the hot seat, allowing them to absolutely pile the pressure onto Williams Esports. A perfect undercut put them ahead, as the British outfit once again suffered in the pits and allowed Simware.Pro some solid breathing space by the flag.

A relatively quiet race for YAS HEAT and Veloce

A little further back and it was a solitary race for YAS HEAT in their grey Porsche. Michi Tauscher, Maciej Malinowski and George Boothby were never really in a position to challenge the top four. They were close in qualifying, but couldn’t covert it in the race, sitting in a bit of a no man’s land. They finished with about 20 seconds on each side of them, but without the Drive Through penalty for track limits they earned mid-race, the squad may have been able to challenge for the top 4.

This was sort of the case for Veloce too – they spent most of the early sections of the race sitting in the shadows, as Eamonn Murphy, Isaac Gillissen and James Baldwin chose to bide their time behind the top two instead. Some electric pace in the final stint proved Baldwin had a lot more pace than we originally thought, but he couldn’t quite materialise a pass on the Williams Esports Bentley.

Williams Esports fights not one but two Bentleys

So, we mentioned that pitstops played a big part in this race – despite the top 5 all being nose to tail, Barcelona isn’t the easiest track to successfully overtake on. There were attempts, but not many successful.

After Williams Esports had their first poor stop, they emerged behind the sister Simware.Pro car. Igor Rodrigues now had to make it past not one but two Bentleys in order to regain the lead, but of course, the inter-team tactics would make that a whole lot harder. He’d sit on the back of Nikita Bogoroditskiy for longer than you could say was ideal, losing a further 4 seconds to the leading #41 Simware.Pro car, bringing the gap up to 12 seconds.

Round two of the late-race pitstops and they’d keep on fighting, taking a decisive move from McCormack to regain second place. The fight would absolutely rage on, as the two teams went toe to toe. In the end, the extra time may have saved the leading Simware car as their lead halved in the last 30 minutes.

Two stars of the top ten, FFS Racing and KKramer Racing eSports showed great pace in the early portions of the race, but it would all unravel for both for reasons outside of their control.

KKramer Racing eSports driver Marco Bischoff would carry his Porsche nicely into the top five after starting in sixth place, sticking to the back of William Hendrickson from Jean Alesi Esports Academy Junior, and the rest of the front runners. After going to battle multiple times, the two began to fade away from the top three. Bischoff would hand over to Jonas van Dreuten who got into the car fourth – jumping the BMW M4 GT3.

From there it was time for him to get his elbows out, fighting with George Boothby in the only other Porsche on the grid and Kyrill Sadyrov. Ultimately, he’d end up behind both, but had a comfortable gap to both the JAEA BMW and FFS Racing’s Killian Ryan-Meenan. Sadly, before the faster FFS Racing Aston Martin and the KKramer Porsche could do battle, a disconnect struck the Porsche squad – a likely guaranteed top ten slipped away.

For FFS Racing, they would keep on strong. Mike Nobel, Killian Ryan-Meenan and James Parker all had rock-solid pace, just like the other front running Aston Martin from GTWR / Dalking Community, who’d come home sixth. However, the now somewhat lonely FFS Racing squad who found themselves in no man’s land, wouldn’t stay on track for much longer –  a fatal internet issue for James Parker forced them out of the race. Both teams had a “what could have been” kind of day, dropping precious points in a tight midfield scrap.

You can’t separate the midfield

The Coach Dave 1000 has a Pro split made up of a whopping 47 cars, so what would you guess the gap from first to last would be in qualifying? Well, we’re sure you wouldn’t have guessed 1.1 seconds…

The tight qualifying gaps set the standard for the race; at the top, there were hours of cars running absolutely nose to tail, but the further down the field you looked, the closer it became. In the first stint, P12 – P17 all were less than a second apart, as each and every driver had a prime opportunity to show their hand and rise to the top.

Inevitably with that, there came some incidents, a few teams falling foul of either their own errors or of the mistakes of their rivals at various points in the race. However, what was clear is that the racing was exceptional.

Despite the countless flawless drives in the midfield, it’s safe to say there was one team that caught our attention – Wild Things Racing. The trio of Chris Hack, Dom Healy and Harry Phillips made up 15 places through the midfield melee! From P23 at the start to P8 at the flag, comebacks like that are a rarity, especially in a pack separated by so little.

Three weeks’ time and the Coach Dave 1000 will be back once more for the Imola 1000! After a fight that raged on almost all race between Simware.Pro by VDES and Williams Esports, those two are surely ones to keep your eye on as we head to the first of two Italian tracks on the calendar.

Don’t discount YAS HEAT and Veloce too, both sat in the background this time around to a relative extent, but there’s a long way to go – 4000 kilometres lie ahead of the drivers in the next few months.

If you want to add that extra bit of spice to your desktop or just some more of the beautiful liveries on the grid today, make sure you check out our Flickr gallery now! We’ll see you on April 30th for the Imola 1000.