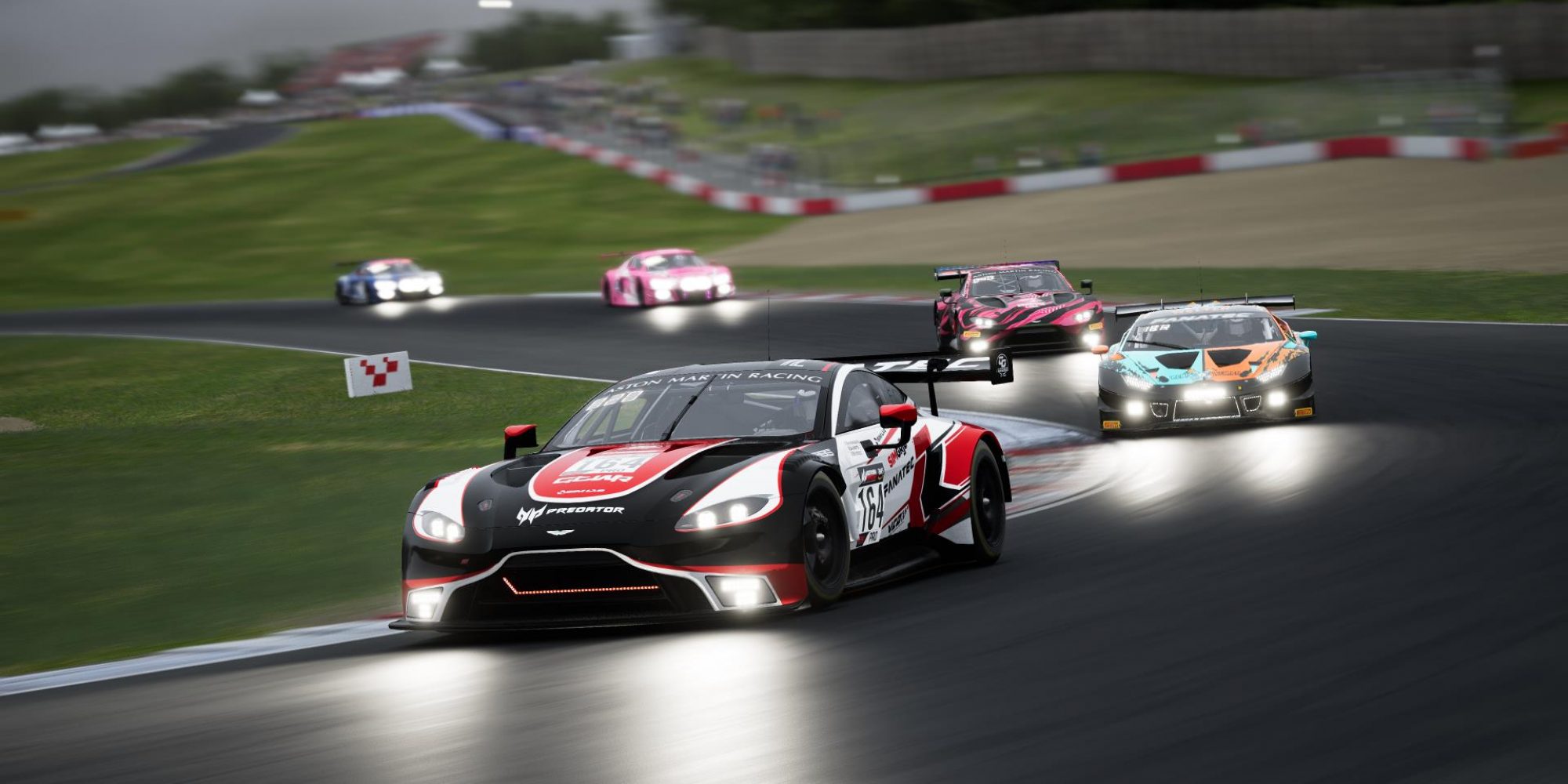 If you are a sim racing enthusiast then you’ve come to the right place. The Sim Grid x VCO World Cup 2021 truly lived up to its hype and kept us entertained right till the end. This year’s edition proved to be a huge success as it continues to be a pioneer for the worldwide sim racing community.

It was a hard-fought 5 round championship with an extremely competitive 48 GT3 car Split 1 field. The format of the races really tested the teams this year. Three 12 hour events and two 24 hour events meant that consistency would be key to come out on top. In the end, it was the #41 AMR V8 Vantage Simware.pro team piloted by the fantastic trio of Egor Ogorodnikov, Mikhail Bykov and Yarolsav Shevyrtalov that came out on top. They took the title by 43 points over runners up #14 AMR V8 Vantage Unicorns of love. Taking the last spot on the podium and just 1 point behind 2nd was the #111 Bentley Continental GT3 2018 DV1 Triton Racing team

Without further ado let’s dive into the juicy details and have a look at each round in some finer detail.

Round 1: 12h of Mount Panorama

The season kicked off at one of the most famous tracks around the world, Mount Panorama. The circuit referred to as the “mountain” was arguably one of the tougher tracks on the calendar. The 6.213km circuit is situated in the city of Bathurst in New South Wales, Australia. More so than most tracks it presents the drivers with a very unique challenge. Elevation changes, limited run-off and of course some ridiculous high speeds creates the opportunity for plenty of thrills and spills.

The Sim Grid World Cup 2020 Champions #157 GTWR R8G Academy 1 started their defence for their title in the best possible way by qualifying on pole. It was however not meant to be. After 12 hours of gruelling racing the #157 Audi had to settle for 3rd position. A great job by the defending champions, not exactly meeting their target but still able to capitalise on a strong track for their car choice.

The team that did have it mostly all their way was the Bentley of DV1 Triton Racing. With just a hint of drama during the race, they did an outstanding job from 2nd on the grid. Their fuel-saving and race strategy worked perfectly to give them the race win by 18 seconds after the 12 hours.

Crossing the line in a superb 2nd was the #121 Odox Motorsport Audi. Jesus Sicilia qualified a strong 7th giving the team a great position to launch their attack from. Strong clinical driving was the target and the drivers achieved just that. It was a masterclass drive from the Audi team.

Some on-track shenanigans to mention was the #62 BMW Team G2 Esports tactics crossing the finish line. Coming out of the final corner in 14th position, Gregor Schill came to a complete stop before the line to let 2 cars from behind pass him before the finish line. The thinking behind the move was to take 10Kg less of success ballast. By doing this the team sacrificed 9 valuable championship points. Worth the risk? Let’s let you decide…

Round 2: Thrustmaster 24h of Spa Francorchamps

The Belgium countryside was the site for round 2. The Spa 24h needs little introduction as for any racing driver, it is one of the most special events in the world. Spa is an exceptional place to race and the excitement going into this one was palpable. Although you couldn’t feel too confident if you weren’t in the AMR V8 Vantage club. It’s definitely noteworthy that 9 out of the top 10 cars were all Aston’s after 24 hours of racing. A truly dominant display, telling us that over a race distance the balance of performance came into play.

Racing can be a cruel sport and the #211 Sidemax Motorworks team found out just how cruel. In a truly heartbreaking turn of events the #211 Aston, who had led large portions of the race, disconnected from the server with 26 mins left on the clock. There’s nothing more devastating than disconnecting from a 24h while leading with so little time left.

This meant that after 24 hours of racing and 580 laps the #41 AMR V8 Vantage Simware.pro team took an emphatic victory. Starting in 9th position the team worked like a well-oiled machine to slowly climb up the ladder. It was poetry in motion for the Aston boys. They were all set to take 2nd but the disconnection from the leaders promoted them to overall 1st.

Also benefiting from the #211 tragedy was #14 Unicorns of Love powered their AMR V8 Vantage. In the end, it was just 26.433 seconds that separated them from the leaders. A very strong showing from the drivers who had some great pace in the tricky rain conditions.

Racing line Motorsport – 191 were upgraded to the last step on the podium. They also had a fantastic race starting in 8th and being able to climb up the order.

Reaching what you could call the halfway point in the championship, the teams shipped off to the British midlands. Donington Park has a long and illustrious history as a racing circuit dating all the way back to 1931. However, it is one of the newer tracks added to the Assetto Corsa Competizione game with the British GT DLC pack. The track is tight and twisty in nature and was certainly a great addition to the championship. The overtake difficulty is very real around Donington so qualifying was super important. As the clouds threatened, 40 cars lined up to start the 12 hours of racing.

One of the standout points was definitely the start. 3 cars came together on the exit of turn 1 causing a huge pileup. At least 25 cars were involved and many teams suffered massive damage. Not what you want to see especially with the race just having started. Moving on swiftly though.

Stars of the race and deserved winners #62 BMW Team G2 Esports powered their way to a dominant victory from 9th on the grid. They carved their way through the starting chaos beautifully. From then on the drivers drove a masterclass. Tactical, cunning and just brute force pace gave the BMW boys a win they will remember for a long time coming. With their lights flashing, they crossed the finish line a whole lap ahead of 2nd place. The biggest margin of victory that we have seen so far in this championship.

Another team that avoided the chaos and drove in a net P2 basically the whole race were the #111 DV1 Triton Racing team. Their Bentley looked like it was on rails as they pounded down the laps, 489 laps to be exact. Crossing the line in 2nd, the team were super happy with their 2nd podium in 3 races. Giving them a strong footing in the championship heading into Round 4.

#32 GTWR R8G Academy – 3 got a great start moving a couple of positions. The drivers kept their Ferrari 488 pointing in the right direction and did enough to secure 3rd overall.

The penultimate round of the 2021 Sim Grid VCO World Cup was up next at the iconic Kyalami circuit in South Africa. The track sits just north of the city of Johannesburg and was given a massive facelift and remodelling in 2015. The 4.529km long track is very technical, posing a challenge to the drivers. You can’t picture a finer place to host a 12-hour race. Being Round 4 out of 5, the race would play such a crucial role for the championship standings. It was make it or break it time.

The top 3 championship protagonists going into Round 4 had a tough time. The leaders in the #111 DV1 Triton Racing Bentley were starting outside the top 20. While the #41 AMR V8 Vantage Simware.pro was also in no man’s land in 21st. Leaving the #14 Unicorns of love team in a good position as they managed to qualify in 4th position. Fast forward 12 hours and it would be heartbreak for the #14 car who would land up with a DNF after multiple disconnects. #111 also struggled and could only finish in 19th. The #41 Aston flew under the radar and kept their noses clean though, finishing in a fantastic 4th overall and handing themselves the leaders of the championship going into the final race.

Looking at your top 3 finishers, it was all teams achieving their first podiums of the championship. It was a home victory for the #777 Simracing Masterclass Bentley. The team who raced with 2 South African drivers were absolutely buzzing at the finish line. It was a hard-fought race between them and the #211 Sidemax Motorworks who finished 2nd. A little bit of redemption for the #211 team who had that heartbreak disconnect at Spa. After 12 hours of racing, all that separated the 2 teams was 21 seconds.

The #33 Rutronik eRacing team had an outstanding race in their Audi Evo Gt3. Starting in 13th the team worked methodically and played their strategy well to get onto the final step of the podium.

Round 5: 24h of Nurburgring

It’s the big one ladies and gentlemen, the final round of the 2021 Sim Grid VCO World Cup. The final saw the drivers pack their bags and set off for the German hills. Few tracks have a history as coveted as Nurburgring especially when it comes to 24-hour races. It’s a truly iconic event that would be the cherry on top of the icing for this championship.

Nerves were at an all-time high as the title and prize money were still up for grabs. The 3 cars to look out for were our famous protagonists #41, #14 and #111. Qualifying was vitally important given the high stakes. The #14 Unicorns of love were the best-placed car managing to grab 4th spot for the start of the race. The #111 DV1 Triton Racing were close behind in 7th, while leaders Simware.Pro found themselves down in 18th due to their success ballast. Get your umbrellas out folks because the start of the race was under heavy wet conditions. Abysmal conditions to say the least.

From the get-go, the #14 Aston put the hammer down. The V8 Vantage was loving the conditions and the drivers got into a good rhythm early on. Within the first 10 minutes of the race, the team had the net lead. It was clear intentions shown by the gents that had DNF’d at the previous round. They carried the good momentum through the race and managed to take the win in commanding fashion, also taking the fastest lap award. It was a heroic drive but in the end not good enough to hand them the title win.

The #111 Bentley also had an incredible race. The drivers were doing godlike things with their car as they were the only Bentley to finish in the top 20. Their 4th place finish gave them 3rd overall in the championship. It was quite a drive from the #41 Simware.pro team, who had a champion deserving drive, finished 5th from 18th in the race and took the points needed to claim the 2021 Championship.

Shoutout to the #149 Yas Heat – Pirelli and #157 GTWR R8G Academy 1 drivers for finishing 2nd and 3rd respectively in the race.

And there you have it. As we touched on earlier, the 2021 Sim Grid VCO World Cup was a massive success. Its growth since the 2020 edition was immense and the driver quality speaks for itself, but all thanks to those who make it possible behind the scenes. From everyone here at SimGrid, we’d like to thank series title sponsor VCO and Thrustmaster for their support and contribution to making this season of racing one of the best Sim Racing has ever seen, as well as Coach Dave Academy, who can provide you with some of the best setup bundles on either ACC or iRacing.

Be fully expectant for the event to return next year in the same world-class fashion. The  #41 Simware.pro team have a title to defend. Can they be the first to do a back to back or will we find some new champions? Only time will tell…