Random Pasta Bowl breathtakingly hunt down the win at Kyalami 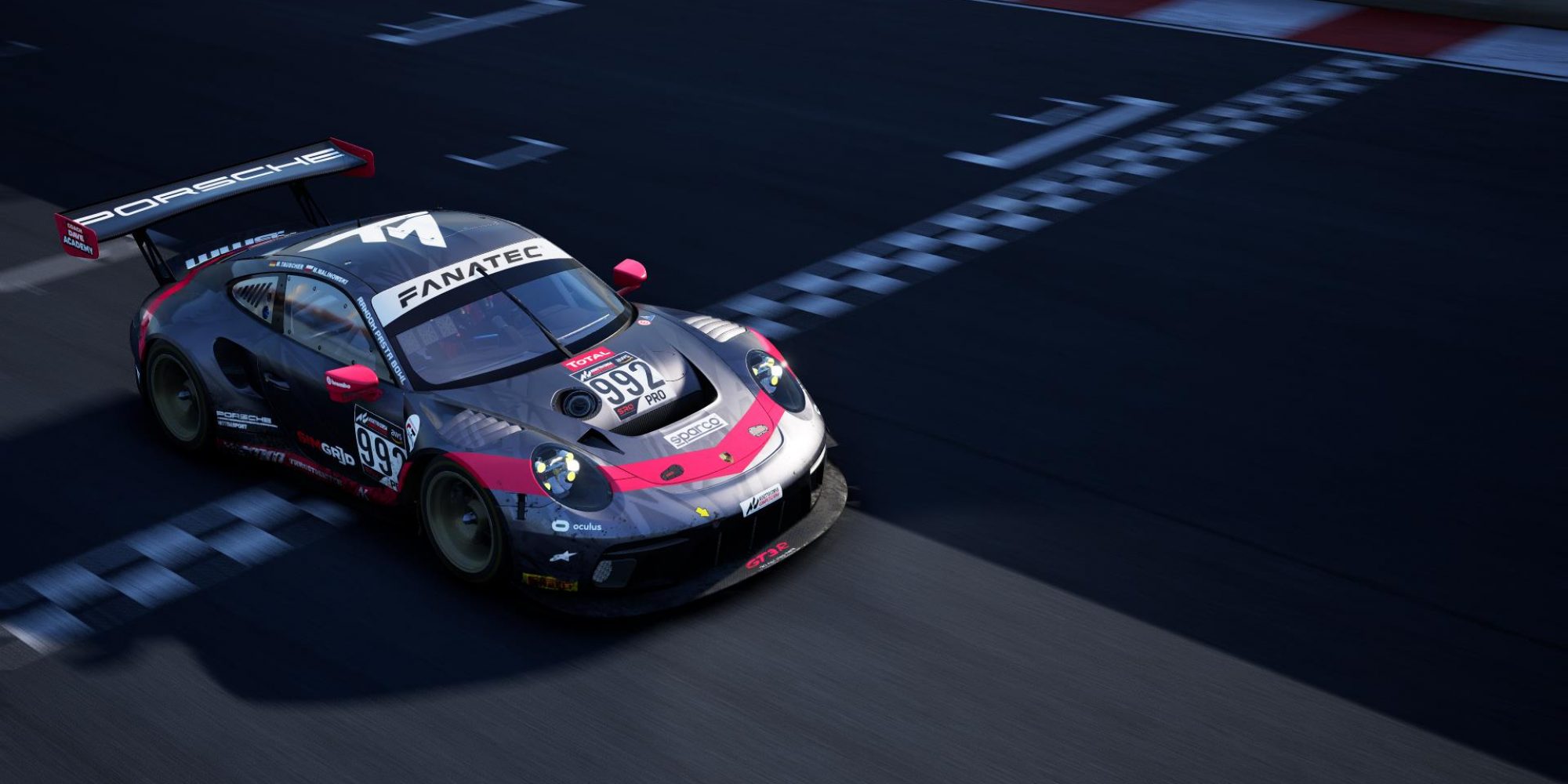 While some of us may still have to recover from the spectacular season-opener for SimGrid’s Sprint Cup Season 4 at Misano, now, two weeks later, the grid headed further down south, to the Kyalami Grand Prix Circuit. After such an action-packed first round, Kyalami didn’t disappoint.

Weather keeps drivers on their toes as qualifying is tight

While it is still early into the season, teams, as well as spectators, will be looking closely for any emerging patterns in pace and for any inclination as to who the championship favourites are. But at the beginning of qualifying, the weather threw in some variables, as rain, the great equalizer, was pouring from the South African skies.

Despite the challenging conditions, the field was close again as the ten quickest drivers all qualified within half a second. It was the UKOG47 team that set the fastest lap time, in a car that is said not to perform too well in wet conditions. George Boothby, behind the wheel of his McLaren 720s GT3, would be lining up in the hot seat nonetheless, just nine hundredths faster than Félix Ruppert in the Excel Racing by RennWelten Aston Martin.

As the race started, the track had already dried – to the great surprise of the field. As the lights turned green the focus immediately was on George Boothby and a very determined #992 Random Pasta Bowl driver Maciej Malinowski. Starting from fourth, Malinowski fought his way right next to Boothby’s McLaren as they were entering Leeukop. He was already a nose length ahead of his rival but Boothby skillfully kept him on the outside as they fought turn after turn.

The UKOG47 driver was clearly hoping that his pursuer would busy himself with Egor Ogorodnikov instead. The #41 Simware.pro driver had already gained two positions on lap one and profited from the thrilling battle in front of him. Indeed, Ogorodnikov made it past the #992 Porsche 911 GT3 R, however, he would soon learn that Malinowski is not a man to concede defeat. In a brilliant move, Malinowski tore second place from the #41 Aston Martin V8 Vantage round the outside at Clubhouse and was off to chase George Boothby again.

For the next 22 laps, the Random Pasta Bowl driver would stay within a second of the race leader. But when Michi Tauscher took over the #992 Porsche the time had come to get the move done on track. Tauscher would prove to be no less aggressive than his teammate, and surprised the #47 McLaren, driven by Niels van de Koekelt (who had subbed in for Boothby), with a swift sweep to the inside of turn two that was nothing short of spectacular. Ultimately, he brought the win home for Random Pasta Bowl with a 20-second gap to Simware.pro’s second driver, Alexander Novikov, who would soon emerge and stay in second position.

Stunning drive from YAS HEAT Microsoft as carnage hurts many

While the battle at the top of the grid had no shortage of small bumps and bruises, it was the FFS Sprint Mammals team with driver Joe McAuley who got a little too friendly with his fellow drivers. As 35 cars were squeezing through Crowthrone Corner at the start of the race, McAuley got turned around and his #123 Audi R8 LMS Evo, unfortunately, made the acquaintance with, well, half of the field and retired soon after.

The UKOG47 team was on its run to a highly deserved finish on the podium in P2. However, by lap 44 Niels van de Koekelt was under intense pressure from the Race Field Team. Their drivers, F3 driver Alex Smolyar and Danila Cherepeninn had been flying through the top of the field, after starting the race from sixth. Thirteen minutes until the end of the race, Cherepeninn had her eyes on van de Koekelt’s second position when she made an error of judgement. After lunging her Aston Martin too deep into the hairpin on the inside, she understeered into the #47 McLaren and put a halt to their inspiring battle as well as to UKOG47’s aspirations for a second-place finish. This optimistic move earned her a drive-through penalty, which put her down the line into seventh.

Niels van de Koekelt, however, immediately became part of the battle between YAS HEAT – Microsoft and Excel Racing by RennWelten. Eamonn Murphy in the #39 Ferrari 488 GT3 Evo steadily applied pressure on the McLaren in front of him and saw his chance when they were lapping a backmarker almost at the end of the race. He mercilessly dived into the inside of turn 10 and stole third place from the unlucky #47 McLaren.

Polar opposite result for Griphax Engineering at Kyalami

After Griphax Engineering – BIOS’ surprising and spectacular win at Misano, they found themselves at the end of qualifying in exactly the same position they started their first race from. This time, though, they couldn’t benefit from the carnage like they wistfully did in Misano, but rather fell victim to it. After the fateful incident in turn two, Joonas Savolainen lost his 12th position and would find himself back in 20th.

Throughout the race, their #11 Ferrari was involved in various battles, taking and losing positions between 12th and 18th. After sending the #166 Bito-SimRacing.de Aston Martin driven by Alex Radizzi in a sideways drift, race control gave Savolainen the rare chance to avoid a 5-second penalty by giving the position back. However, when he immediately thereafter dived into the pits, Savolainen might have forgotten to inform his teammate, as Jesse Kauppinen continued the race ahead of Tom Reiher, who was now in the #166 Aston Martin.

Their race proved to be done and dusted by lap 25 when Jesse Kauppinen made contact with the back of Hamada Erquizi’s #27 SDL Esports by Logitech G McLaren. Their resulting drive-through penalty would seal their result in a disappointing 31st place – a polar opposite result compared to last time around.

What the Podium Drivers had to say

After the race, the winning Random Pasta Bowl team allowed a glimpse into how they set up their race win while chasing the #47 McLaren for almost 50 minutes.

“[George Boothby] had a really good pace. He wasn’t holding me up [and] was easy to follow”, Maciej Malinowski explained, while emphasizing the trust he had in the driver from the UKOG47 team. “We knew that the race is long… we possibly [had] a superior driver for the second stint, so I was taking it more cautiously.”

If this race was a testament to what “taking it cautiously” looks like for the Random Pasta Bowl team, it will be interesting to experience the full force should they come to contend for the championship title.

The third-placed YAS HEAT – Microsoft team experienced a truly exhausting 90 minutes as Eamonn Murphy described: “Maybe that wet qualifying helped us to get into that P7 to start the race. During that race, [I] was giving the max I could get out of this car. I didn’t think I would be doing any better than P5 today.”

“Oh yeah! We had ninety minutes of defending and fighting”, his teammate Jaroslav Honzik enthusiastically expressed. “I think this was the most awesome race we had in the past weeks or months. Extremely hard pressure, very clean driving. It was tough. I really loved that.”

After this second race of the early season, UKOG47 is leading the championship by the tiniest margin. Wet qualifying here at Kyalami made for an entertaining mix-up of teams with various strengths, as six teams at the top of the standings are only separated by six points.

Join us for round three of SimGrid’s Sprint Cup Season 4 on Thursday 5th August when the field will climb the treacherous Mount Panorama in Bathurst.