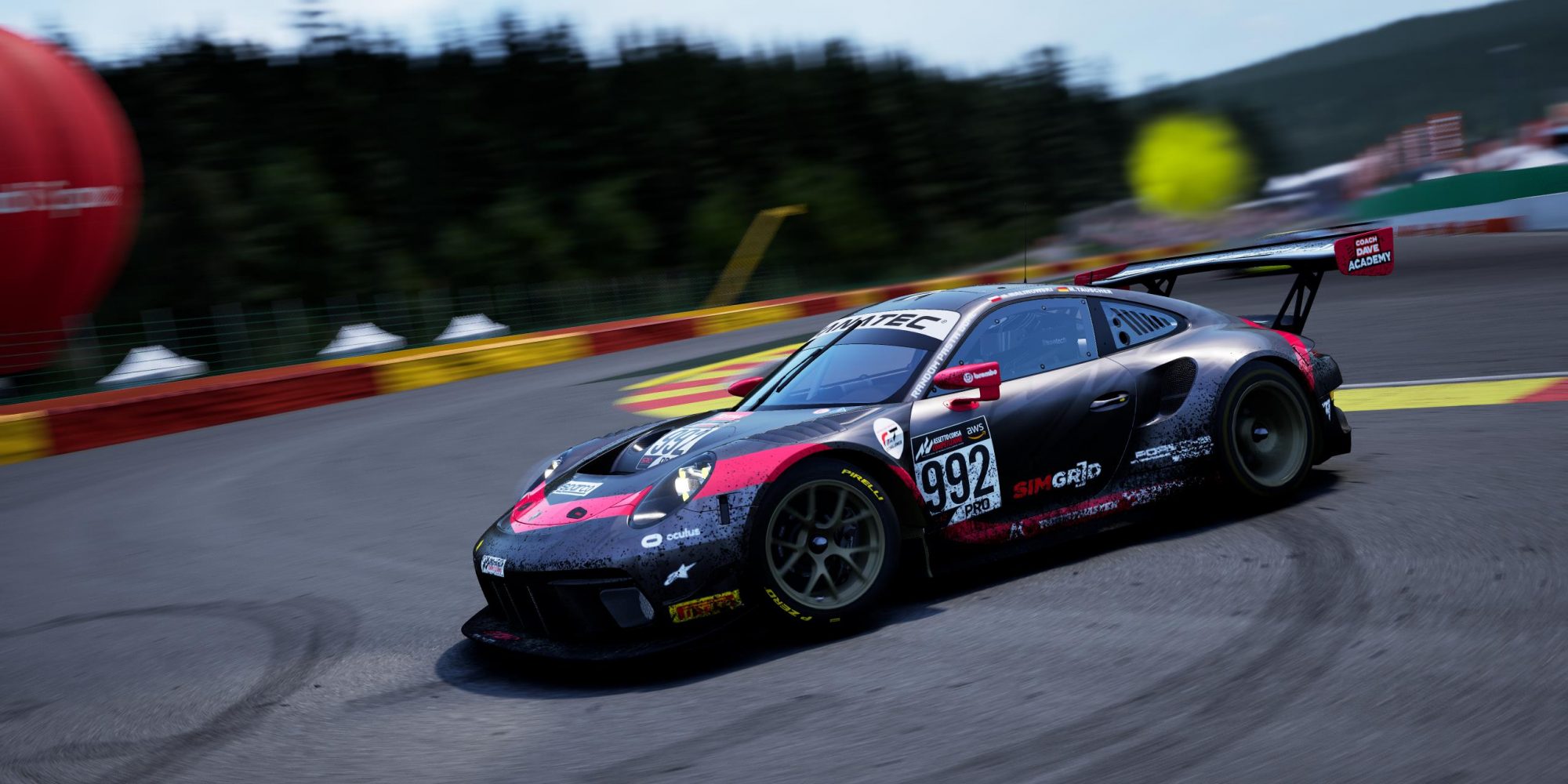 The champions have officially been crowned. After a scintillating display of form over the course of Season 4, Random Pasta Bowl has been crowned SimGrid Sprint Cup champions at Circuit Spa Francorchamps. Here’s how they did it:

With the title fight now down to just two teams, it was rather fitting that the pair of them would lock out the front row of the grid after qualifying. Michael Tauscher would be leading the way for the points-leading #992 Porsche, but George Boothby was placed within striking distance to give the #47 UKOG47 team a shot at causing an upset.

As the race got underway, it was Tauscher who got the better start, but this allowed Boothby to tuck into the Porsche’s slipstream along the Kemmel straight. As a result, the McLaren was able to dive to the outside at the entry to Les Combes, handing Boothby the inside line for the second phase of the corner. This was enough to ensure that the lead had changed hands by the time the cars reached Malmedy bend, though it wouldn’t last for long.

At the end of the first lap at the bus stop chicane, Boothby carried too much speed into the corner and ran deep, leaving the door wide open for Tauscher to reclaim first place. In fact, Boothby did well to hold off the advances of Jan Willem van Ommen in the #38 Dalking Community Aston Martin.

On lap two, the fireworks really began, however. First, in the midpack, the pace difference between the #111 Elferspot.com Porsche and the #100 Turn1 Aston Martin caused the latter to make contact with the rear of the Porsche, sending it spinning off into the barriers at the exit of Raidillon before bouncing back onto the racing line where it was collected by oncoming cars. Naturally, the #100 was handed a drive-through penalty, but that wouldn’t be the end of the drama on this lap.

Slightly further ahead, Boothby again tried to take the lead of the race, but this time ran too deep into Les Combes. At this point, the first group of cars had all bunched up together, and as Boothby rejoined the circuit this only made things tighter. In the end, things simply got too close for comfort, as Damian Pawlus in the #7 Carbon Simsport McLaren tagged van Ommen into a half spin at Speakers Corner. Both of them would drop to the lower end of the top ten, but at least everyone had emerged from the battle in one piece.

With everything going on behind them, Random Pasta Bowl saw their opportunity to make a run for it. However, UKOG47 were coming with them. In fact, having dropped the rest of the field, Boothby saw another opportunity to perhaps wrestle the lead away from Tauscher. Again at Les Combes, the Brit took to the outside line, but this time slight front-to-rear contact was made. Although it looked like a precarious moment, both drivers handled the situation perfectly, with the McLaren backing out of the move as much as possible and Tauscher doing a great job to keep his Porsche pointing in the right direction.

However, this little incident meant that Boothby had fallen back ever so slightly from the tail of Tauscher’s Porsche, and that was effectively enough to decide the race. From then on, the young German extended his lead to eight seconds by the time he had to hand the car over to Maciej Malinowski, and that gap would only increase further.

UKOG47 were unable to capitalise in the pit lane, and although Niels van de Koekelt continued to lap the McLaren at a good pace, Malinowski was able to push on to another level in the Porsche. Soon enough, this race turned into yet another display of dominance from the Random Pasta Bowl crew, who would go on to take the race victory by a whopping eighteen seconds.

It would be the team’s fourth race victory of the campaign, and with that, they secured their unassailable lead in the standings to become the fourth-ever SimGrid Sprint Cup champions.

The battle for third

Truth be told, it was always going to take something remarkable for anyone other than Random Pasta Bowl to take home the title on this occasion. As a result, the closest fought – and possibly most interesting – the battle was for third place in the overall standings. Heading into this round, the #71 Excel Racing by Rennwelten team and the #340 Omega G-Performance squad were split by a hair, though after qualifying, it looked very much as though it was advantage to Rennwelten. The #71 Aston Martin had qualified in a respectable tenth, whereas the #340 Bentley had plenty of work to do from eighteenth. Happily, though, Khali Atkins was up for the challenge.

In the #71 car, Felix Ruppert made a good start. Managing to avoid what contact there was, Ruppert climbed his way up into the top six after just a handful of laps. However, Atkins had also been working his way up the order, and at quite some pace. In fact, by lap three, the Bentley was in seventh; the two contenders almost inseparable once again. At this stage, just a single championship point was the difference between the two teams in the overall standings, so whoever finished ahead on the road would claim that third-placed spot overall.

Atkins would indeed get the pass done for sixth position, elevating Omega G-Performance into the hot seat. But unwilling to rest on his laurels, the Jamaican wasn’t done there. On lap ten, Kylian Ryan-Meenan of #888 FFS Sendypoos crowded Joonas Savolainen out to the run-off area at the exit of the chicane. But then, the tables turned as he ran too deep into La Source. This allowed Savolainen in the #11 Griphax Engineering Ferrari back past, and with him, Atkins too. The predator quickly turned into the prey, however, as along Kemmel Straight Atkins tucked into Savolainen’s slipstream before making the move for fourth as the cars headed into Les Combes.

Five laps later, a podium finish was in sight. Sascha Glatter in the #81 Black Hawk Racing Aston Martin had a fifteen-second penalty to serve for being a solo driver anyway, so the position was already in Atkins’ possession. But, penalty or not, Glatter was another car to pass, and Atkins promptly did just that on the outside line at the chicane. With that move, he made sure of a nicely symmetrical race result, as the top three in the championship standings crossed the finish line in exactly the same order in the race.

Thoughts from the champions

So there you have it, Random Pasta Bowl is the Season 4 champions of the SimGrid Sprint Cup – and thoroughly well-deserved champions at that. Nevertheless, to get the job done, it was always going to be important to convert pole position into a healthy lead in order to avoid any midfield mayhem. Tauscher was given this task, and with George Boothby poised to attack, it was far from straightforward.

“It was a tough start because we don’t have any straight-line speed in the Porsche,” Tauscher said. “We were hoping for wet [conditions] but unfortunately it was dry. I somehow kept George [Boothby] behind and he luckily made one mistake. So yeah, from that point on I just kept pushing and pushing.”

And push he did. By the pit stop phase, the #992 entry had eked out a race lead of approximately eight seconds. After that though, Malinowski really ramped up the pace. So how did he do it?

“I think that has to be BoP!” Malinowski joked. “The car felt amazing, I just like that car even though it’s not outright the fastest.

“We run the SimGrid custom BoP of course, so we had some ballast on the car but not that much, and both me and Michael, we know how to make that car go fast. Both setup-wise, both driving-wise – not only today in that stint when I drove away, but throughout the season we just enjoyed ourselves driving [the car] so much.

“Sometimes it seems easy alone but we are always trying to push to be as fast as possible. So yeah, it was just an amazing season for us, and this race today was a great way to finish it with another win on a track where we didn’t really expect to perform well. We put in some time earlier today [to practice]. We gave our best to really solidify the season.

“We’ve enjoyed it so much, and we’re looking forward to seeing you again in the next championship!”
Think you’ve got what it takes to defeat Random Pasta Bowl in Sprint Cup season 5? Well, keep an eye out on our announcements page for the latest updates about how to get involved as soon as we can get them to you. For now, though, SimGrid’s attention turns to Season 4 of the ACC Endurance Cup, which kicks off at Spa on Saturday 9th October.