R8G eSports are Endurance Cup Champions with a win at Kyalami 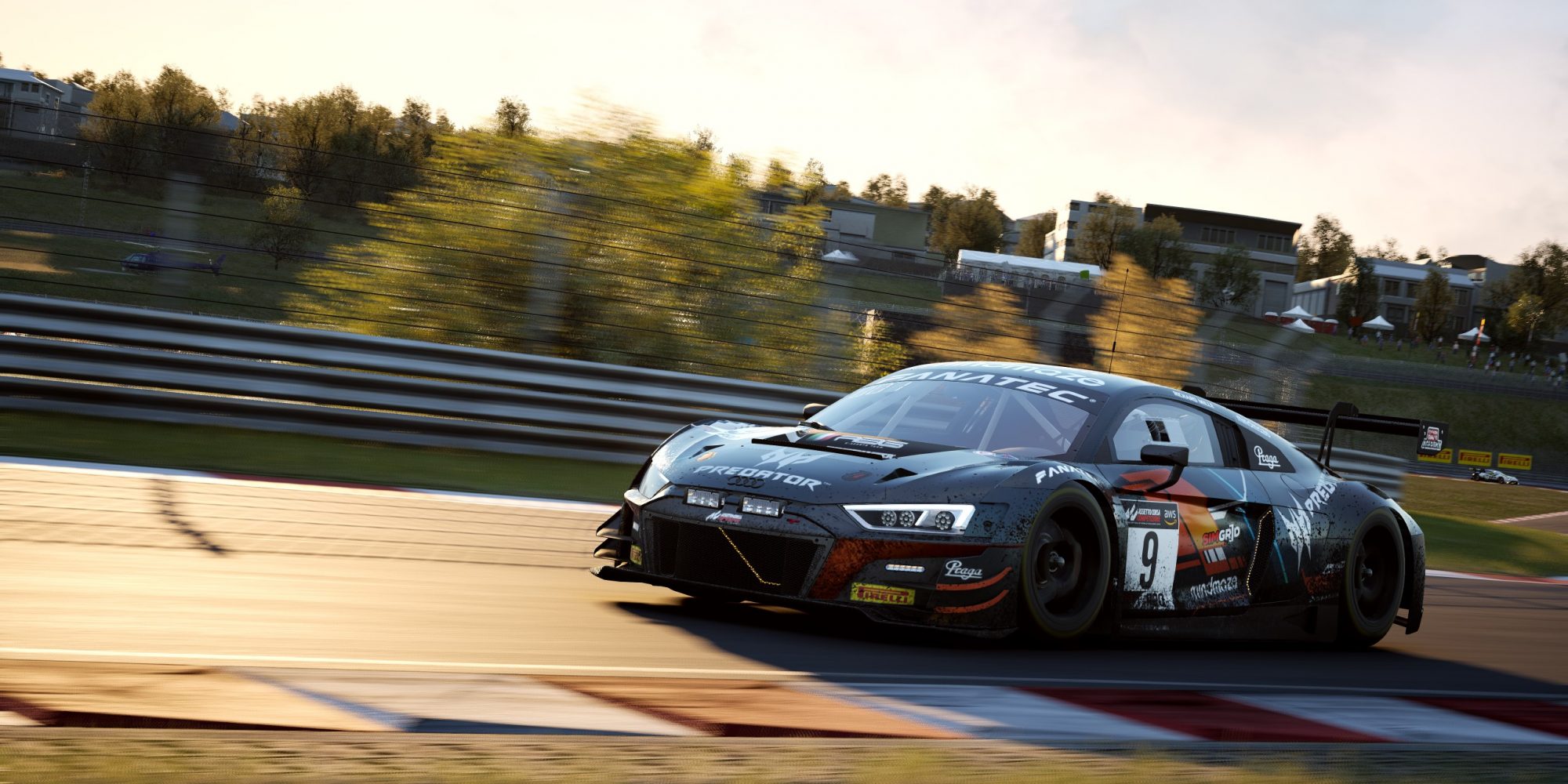 Round 4 of the SimGrid Endurance Cup saw us head to the South African circuit of Kyalami – a track where we’ve seen no lack of action in the past here at SimGrid. After a race full of upsets a few weeks ago at Paul Ricard, there were a few teams eager to turn their luck around, but also no lack of drivers looking to maintain their momentum.

Heading into the first of the six hours, it was R8G eSports with a sizeable gap in the standings that needed closing. However, with their closest rivals of YAS HEAT starting in fifth, they were on the front foot from the very beginning and had the chance to wrap up the title.

The R8G eSports Audi in the hands of home town hero Jordan Sherratt lined up on the grid second for the penultimate round of the championship, with GTWR R8G Academy Black alongside them on pole. Capoccia in the GTWR first place Audi didn’t hold the lead for long, though, as Sherratt slipped up the inside almost instantly, snatching first place at the earliest opportunity. This really set the tone for the rest of the race, as we watched the rest of the pack battle away whilst R8G eSports checked out at the front.

The squad of Jordan Sherratt, Niklas Houben and Dennis Schoeniger were pretty untouchable for almost the entire race. In the first hour alone, they extended a gap of around 20 seconds, which they maintained all the way until the last 90 minutes of the race. To say it was a champions’ drive would be an understatement, but they weren’t completely without rivalry.

Come the last hour and their lead really started to decrease, as Darren King turned up the heat in the #383 Dalking Community Aston Martin. Some late pressure from them saw the gap drop all the way down to under 5 seconds, but some solid laps in a late push saw Sherratt bring the Audi home in P1, becoming Endurance Cup Season 4 champions, all with a race still to go.

First-hour battling flips the race on its head

As R8G eSports checked out at the front, it all kicked off behind them. GTWR R8G Academy was sitting pretty at the beginning, as both the team Black #457 and team White #32 cars sat closely behind Jordan Sherratt, however, a racey Simware.Pro Bentley who started third was about to spoil their party.

Right from the outset, Kirill Sadyrov at the helm of the Simware.Pro machine was going wheel to wheel with Andrea Benedetti from GTWR and George Boothby in the YAS HEAT Porsche. Sadyrov, who was looking to unleash his pace on the top three, was all over Benedetti, but after a failed overtake attempt, Boothby seized the opportunity and attempted an overtake in the middle sector. Sadly for him, he may have been a little over-optimistic, making contact with the light blue Bentley and spinning into the wall. It would be a long comeback drive ahead, but the battle continued at the top.

Sadyrov was getting his elbows out, making contact with both GTWR Audis at some point in the first 30 minutes, allowing a cunning van Ommen in the Dalking Community car to make up places to snatch second, but certainly not without opposition, as he fought tooth and nail with the Bentley to secure his place. Great entertainment that’s for sure, but it didn’t do the Bentley any favours, picking up a fair share of damage and an odd penalty in the process which would eventually drop them out of the top ten.

Whilst we focussed on the top four, the rest of the top ten had also been brought into the fight, as lacking no pace themselves, they were offered a golden opportunity to gain points. PRIME eRACING was amongst one of these standouts, but their points haul didn’t quite come to fruition.

Dalking Community and GTWR benefit from the disruption

All the battling in the top ten meant Sherratt could extend that all-important gap at the front, allowing the R8G eSports outfit a fair bit of breathing room that would, as mentioned earlier, prove neverendingly important as the clock ticked down.

Van Ommen meanwhile opportunistically made up places from sixth on the grid all the way up to second as the drivers did battle, teeing up a strong finish that would see them propel themselves into the top three in the championship standings. The multiple GTWR teams would eventually benefit from the first-hour fights, as both GTWR R8G Academy Black and GTWR R8G Academy White would be joined by their Aston Martin stablemates at the sharp end. All in all, it turned out to be a good day for the outfit as the flag fell after a difficult race at Le Castellet.

The Dalking Community squad of Jan Willen van Ommen, Darren King and Mike Nobel showed their pace throughout the race, proving last race’s incredible comeback wasn’t a fluke at all, sailing to P2 despite a late push which pressured the leading R8G eSports team.

The battle for second in the standings heats up

Whilst R8G eSports has somewhat waltzed away at the top of the standings in recent races, the championship battle behind them still hasn’t calmed down. After a really tough race for YAS HEAT at Paul Ricard, who prior to the race had two cars in the second place fight, RennWelten eSports and Dalking Community picked up the pieces, launching themselves into the top three.

YAS HEAT only fielded one car this race, as the YAS HEAT Pirelli McLaren never started due to their participation in the Virtual 24h Le Mans, but the team’s Porsche squad was ready to make gains on their rivals. However, that early contact with the Simware.Pro Bentley meant they had a tough job to really gain points, but a comeback drive to fourth has really kept them in the game.

There are just four points between them and the Dalking Community Aston Martin for second place as we head to the finale at Mount Panorama, so it’ll be all to play for, especially with GTWR waiting close by.

RennWelten eSports couldn’t really carry on their role of strong results this time around though, as contact in the first hour left them with heavy damage and a tough race ahead of them. They did manage to fight all the way back to P15 though, but it wasn’t quite enough to leave them as favourites to take the runner up spot heading to Bathurst as we leave Kyalami.

What to look forward to next time out

The fourth season of the Endurance Cup is almost coming to a close, but there’s still one final chapter in this enthralling tale. Mount Panorama is playing host to the finale, as we head down under on the 5th of February to decide the championship. We may already have our champions, but that doesn’t mean there isn’t still points to be won and positions to be gained. Come and join us then for the last six hours of action, live on our YouTube channel.

Oh, and before we go, remember you can check out some beautiful screenshots of the South African sunset and our newly crowned champions in our Flickr gallery.