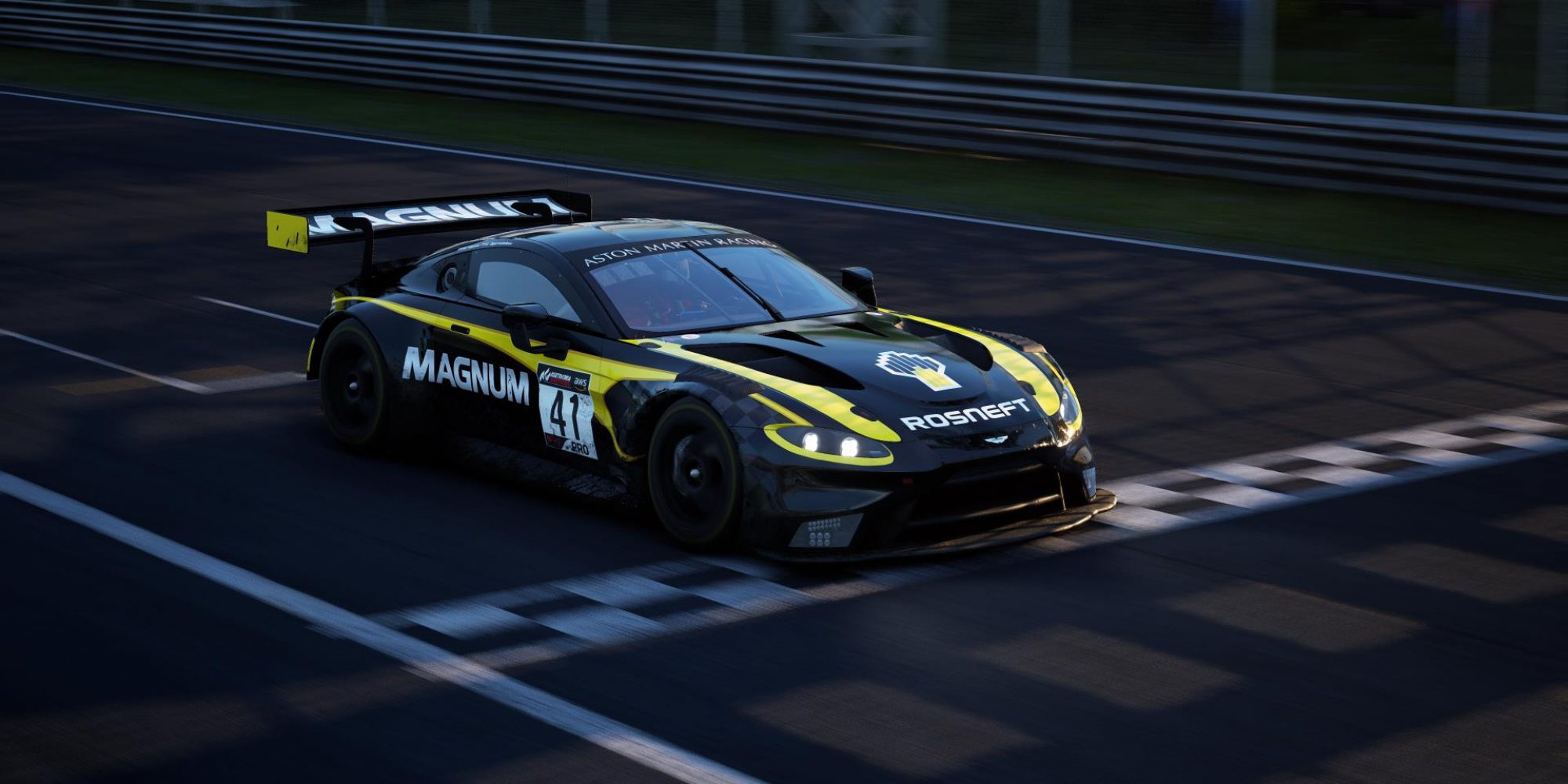 Round two of The Sim Grid Endurance Cup saw our teams head to Northern Italy for six hours of racing around the legendary Monza circuit. This was the first Endurance Cup race to incorporate The Sim Grid’s new custom Balance of Performance measures, which have been designed to maximise the overall parity between all cars without fully eradicating their individual quirks. As a result, six different manufacturers were represented in the top six during qualifying, with the top forty teams being covered by less than a second. Naturally, this left the prospect of an enthralling race to come…

Fresh off the back of their Sim Grid x VCO World Cup race win at the 24 Hours of Spa, LADA Sport ROSNEFT continued their fine form into this weekend. Egor Ogorodnikov was behind the wheel for the first stint, and after fending off Danilo Santoro in the #27 Jean Alesi Esports Academy car for second place, he soon had his sights set on the lead. It quickly became apparent that the race leading #194 Racing Line Motorsport car of Matteo Blotto didn’t quite have the pace to keep the Russian ace behind, and sure enough, Ogorodnikov managed to overtake on the outside line heading into the tricky Variante del Rettifilo.

The LADA crew didn’t have it all their own way though in the opening hour. After around fifteen laps, Santoro had closed back up to Ogorodnikov and became a real threat for the lead. After a failed move at turn one, the #27 car took to the outside line through Variante della Roggia, which then gave Santoro the inside line for the first Curva Lesmo. With that, Jean Alesi Esports Academy had taken over the race lead, but Ogorodnikov wasn’t about to concede so easily. During the next tour of the first corner, he placed his car on the inside line but slightly misjudged the closing trajectory of Santoro and contact was made. Luckily, both cars continued without losing positions, though the stewards deemed the manoeuvre worthy of a five-second penalty.

Nevertheless, LADA Sport ROSNEFT returned to supremacy after a pit stop and driver change, when Maichol Tonizza in the #27 car got tangled up with traffic at turn one. This allowed Ivan Shermetinskii to close up and pass around the outside on entry to the Ascari chicane. From then on, the victory was never really in doubt, as the team went on to carve an imperious lead over everyone else. However, it could all have been thrown away right at the end, when Yaroslav Shevyrtalov made contact with the #11 Griphax Engineering Mercedes while celebrating across the finish line. At that point, the Griphax car hadn’t finished the race but was sent sideways across the start-finish straight after being clipped by the fishtailing race winner. In the end, no action was taken by the stewards, and the victory would stand – much to the relief of Shevyrtalov!

Titanic battle for the podium

Although the LADA Sport ROSNEFT crew made victory look fairly straightforward, the race for second place was anything but. Having lost out to Shermetinskii, Tonizza held the second-place spot for a significant period of the race. However, the #333 Virtualdrivers by TX3 Nissan GTR had been rapidly charging up the order after surviving a startline pile-up. Now, it had Tonizza in its sights, but before Maxime Batifoulier could launch an attack, Tonizza did all the hard work for him by crashing out on the exit of the Ascari chicane. An unsafe rejoin caused a near-miss moment for Jaroslav Honzik, who had to take sudden evasive action onto the grass, but luckily everyone would escape without damage. Everyone except Tonizza, who had to bring the #27 car back into the pitlane, effectively ended Jean Alesi Esports Academy’s hopes of a top result.

With that, it came down to a three-way tussle for the final two steps on the podium. With an hour to go, Florian Bonjour had taken over the reins of the #333 Nissan, but as the minutes ticked by, second place began to look less and less certain. Behind the Frenchman, the championship-leading #121 Odox Motorsport Audi and the #149 YAS HEAT Ferrari were getting closer with every lap. Then, during the final round of pit stops, Odox Motorsport climbed up into second place after executing a perfect overcut strategy. However, the following lap, Bonjour powered alongside Nicolas Albaladejo Camins through Curva Grande, and emphatically reclaimed second place on the inside line into Variante della Roggia.

Albaladejo Camins would try to get back ahead again at turn one, but all this really did was allow Honzik to think about an overtake in the #149 YAS HEAT entry. Eventually, ‘Jardier’ did manage to get by the #121 car at the very same corner a few laps later. The battling between the two of them had given Bonjour some breathing room in the #333 Nissan, but then a very unfortunate turn of events would snatch the podium finish away from him. On the exit of the second Curva Lesmo, Bonjour was massively held up by Blotto in the #194 Mercedes, and this allowed both Honzik and Albaladejo Camins to get by on the run through Curva del Serraglio. Blotto would be dealt a drive-through penalty for unpredictable driving, but that ultimately wouldn’t give Virtualdrivers by TX3 their podium back, as YAS HEAT Richard Mille and Odox Motorsport would go on to claim second and third place, having started way down in fourteenth and sixteenth respectively.

Normally, starting at the front of the grid should be quite an advantage when it comes to placing well at the end of a race. However, that certainly didn’t transpire on this occasion at Monza. One entry that we haven’t mentioned so far is the #107 Bentley of Omega E-Racing Team, and unfortunately, there’s a very good reason for that. At the start of the weekend, it looked as though the team were set for a strong outing, as despite carrying 35kg of ballast onboard their Continental GT3, Giuseppe Montalbano managed to secure pole position. Sadly though, their race was over before the green flags could even be waved, as a driver disconnection error meant that the team were forced into retirement immediately.

Things didn’t go much better for Montalbano’s fellow front-row starter, Matteo Blotto in the #194 Racing Line Motorsport Mercedes-AMG GT3. Blotto led the way in the early stages, but the team struggled for pace throughout the race. As the hours went by, the positions trickled away, and by the time the chequered flag was unveiled the team had dropped to seventeenth place from second on the grid. This would certainly be a race to move on from and forget quickly.

However, while some of the early pace-setters in qualifying fell by the wayside, a few teams managed to quietly work their way up the order from far lower positions on the grid. The #888 CDA/DAL/ACR Aston Martin was a great example of this, as they powered their way up from twenty-first to finish seventh. Admittedly, the #888’s progression was perhaps a little less quiet than some others, as they were engaged in some awesome battles throughout the midfield. For much of the race, James Parker and Darren King was engaged in captivating combat with their counterparts in the #996 Ambassadors for Rennwelten McLaren, #14 Unicorns of Love BMW and #404 H3Racing Ferrari. The team’s overcut strategy seemed to work a treat, and once they had gapped the rest of that entertaining quartet, were soon able to pick up two free places when the #71 Excel Racing by Rennwelten Audi and #66 Team Fordzilla Lexus had their own incident. This was a performance that combined fair and effective overtaking with an alternative pit strategy that kept them out of much of the trouble on the circuit. Overall, not a bad day at the office.

What is up next for the Endurance Cup?

With that, it’s all to play for in the championship standings. Odox Motorsport had arrived at Monza as the series leaders, though a poor qualifying result left them under threat from their nearest challengers. Ultimately though, a terrific drive to third place would ensure their points lead remained, however, their tally is now equal to that of Monza victors LADA Sport ROSNEFT, with both teams having earned 86 apiece. YAS HEAT Richard Mille are only two points further behind after their second-place finish this weekend, which suggests we’re set for a super close title battle in the remainder of the season. You certainly won’t want to miss out on that, so join us again for round three of The Sim Grid Endurance Cup when we head over to the United States for three hours of Laguna Seca on Saturday the 12th of June!