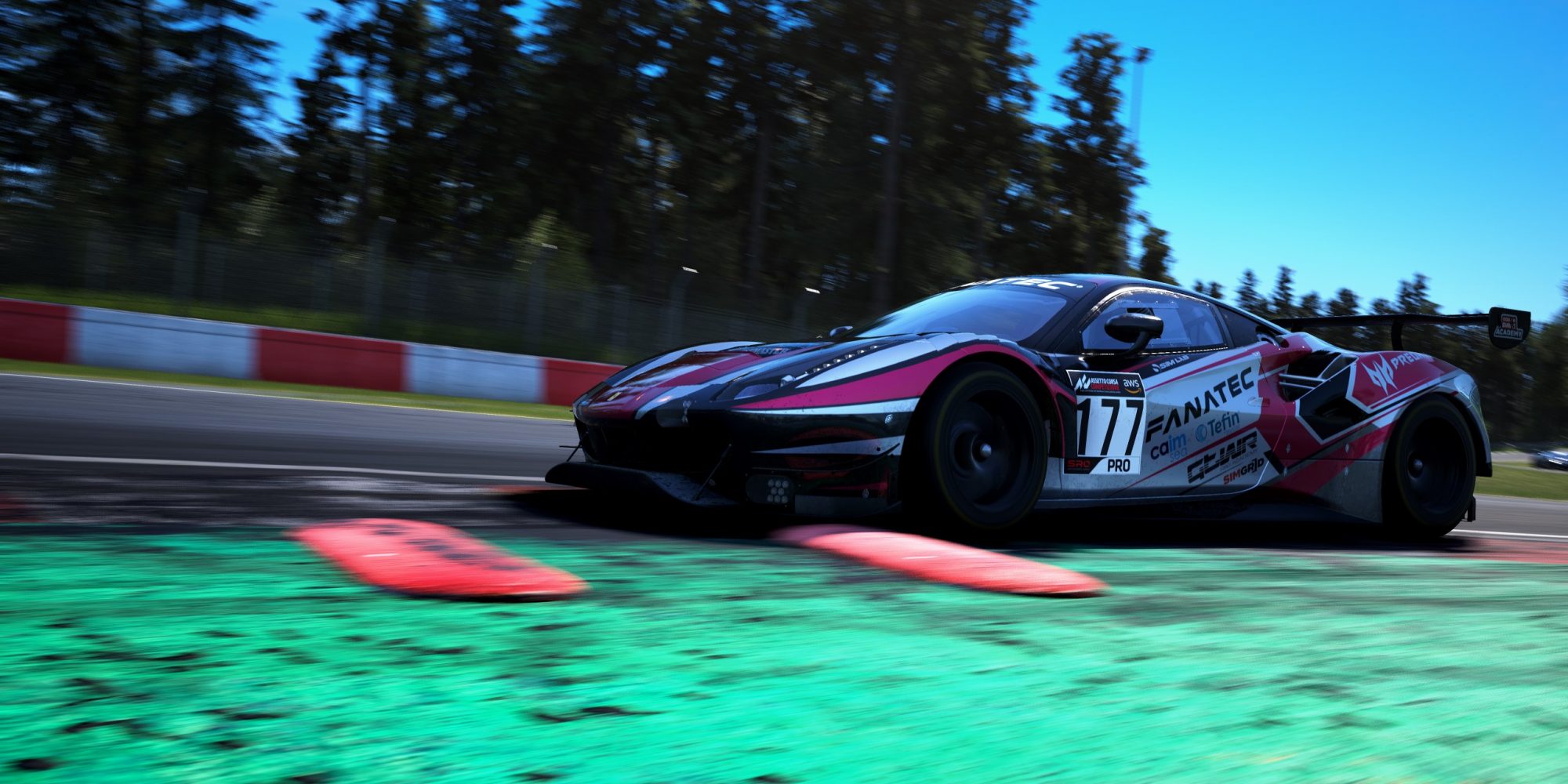 The penultimate round of season 4 had us all on the edge of our seats. Action-packed and full of drama, More Female Racers Round 5 at Zolder definitely didn’t disappoint from a spectators point of view. GTWR R8G Female Racing 1 is now sitting comfortably with a 20 point cushion to rivals Griphax Engineering with only 1 round remaining. It should be smooth sailing from here for the #177 Ferrari but in the world of racing anything is possible, so don’t place your best just yet.

Sara Dove can count her lucky stars as she avoided the chaos that Zolder provided to take a comfortable win over her rivals. The fastest lap, no incidents and a race win is exactly what she needed at the penultimate round.

The Pro Class rivals started on the front row together and managed to get a clean start. Aloo Gobi in the Griphax Racing Ferrari set the early pace but disaster struck shortly into the first stint. With the current purple lap, Gobi pushed maybe a little too hard and coming out the first chicane disaster struck as she lost control of the car and spun off onto the grass. Dove collected the lead from there, inheriting a 5-second gap to her rival.

Going into the pit stops Gobi managed to reel the gap back down to 2 seconds. Things really heated up when Dove decided to pit, Gobi opted for an alternative strategy and did one more lap. Gobi’s in lap was absolute fire and she also managed to nail the pitstop to hand her teammate, Harry Phillips, the lead of the race by 3.5 seconds. Phillips had a mighty stint in the #12  Griphax car, furthering their gap over the GTWR team.

Unfortunately, with 10 mins left in the race and Gobi back in the car, disaster struck again. Going into the last chicane Gobi was collected by an over-ambitious backmarker who outbraked themselves, tapping Gobi and sending her off the track. This would ultimately cost her the win as Dove came cruising past to regain the lead. A dramatic finish to an utterly thrilling race!  Yvonne Houffelaar brought her battered and bruised car home for her 3rd podium finish in a row for the R8G eSports team. While Mia Swensen suffered a DNF for Intruder Racing Team.

Just like in the Pro class, the drama was in abundance in the Silver category. Tough day for Sophie Aeronwen who was involved in a Turn 2 incident off the start of the race. It cost her heavily as she crossed the line to finish P12, losing her the championship lead going into the last round. Another driver involved in that same incident was Natalie Lee, like Aeronwen, it cost her heavily. Finishing a disheartening P11 in the end for her Turn 1 Grazie Kimi team.

Two teams that were smiling after the crash were GTWR R8G Female Racing – Emerald and Turn 1 Magnum. They both got through the incident unscathed and ensued their fight which turned into the battle for the lead. What a battle it was! The teams were neck and neck all race long. With barely any time left on the clock, Esmeralda Van Der Naald made a fantastic move for the lead of the race. It was tight stuff as she defended her lead. Selene Witcher in the Turn 1 car tried her best to hang on but in the end, had to settle for P2 giving Van Der Naald the win for GTWR outfit.

Crossing the finish line in P3 and taking her 2nd podium of the season was Laura Valenza in another GTWR car. The 17 points she added to her name now put her in P4 in the championship with the possibility of finishing in the top 3 still.

Going into the last round it’s going to be a tough task to beat Van Der Naald who has won the last 2 rounds and who now leads the championship by 4 points over Aeronwen. Grab your popcorn ladies and gentleman because this is one you don’t want to miss.

Eliza Indriani take a bow! She has been a force to reckon with in season 4. It’s no small feat to take 4 wins out of a possible 5. Especially in this competitive field of drivers. She was streaks ahead of her competition once again in Zolder giving her team Luna Nera a great showing. With a very comfortable buffer in the championship, there is no reason she won’t be crowned champion after the last round.

Hitode Racing HYGGS Boson must be delighted with their driver Charlotte Robertson who took her first podium of the season. Although finishing a lap behind the leader she did brilliantly to hold off the stiff competition from Turn 1 driver, Hedda Rangseter. Rangseter had a tough race but was able to put in a stunning lap to claim the fastest lap award. Wild things Racing Sabine rounded off the grid with their driver Melissa Taplin.

In terms of the championship, Indriani holds a 14 point lead over Rangseter. Should be an exciting last round to see who will end up on the top step. Robertson has a tight grip on 3rd and shouldn’t have any threats from behind.

What’s up next for More Female Racers?

Save the date, the 20th of December is the championship decider and the last round of More Female Racers Season 4. It has been a season filled with many thrills and spills and we can’t wait to see how this one will conclude.

In a slight twist for the drivers, the last round was left to the vote of the public to decide where the race will take place. Drum roll…. We are happy to announce that Donington Park will host the last round! A track with a great history and in recent times has produced some great racing on the Assetto Corsa Competizione platform.

With all the championships still to be decided it could be the best race of the season so far. Be sure to tune in to watch the fireworks on track.