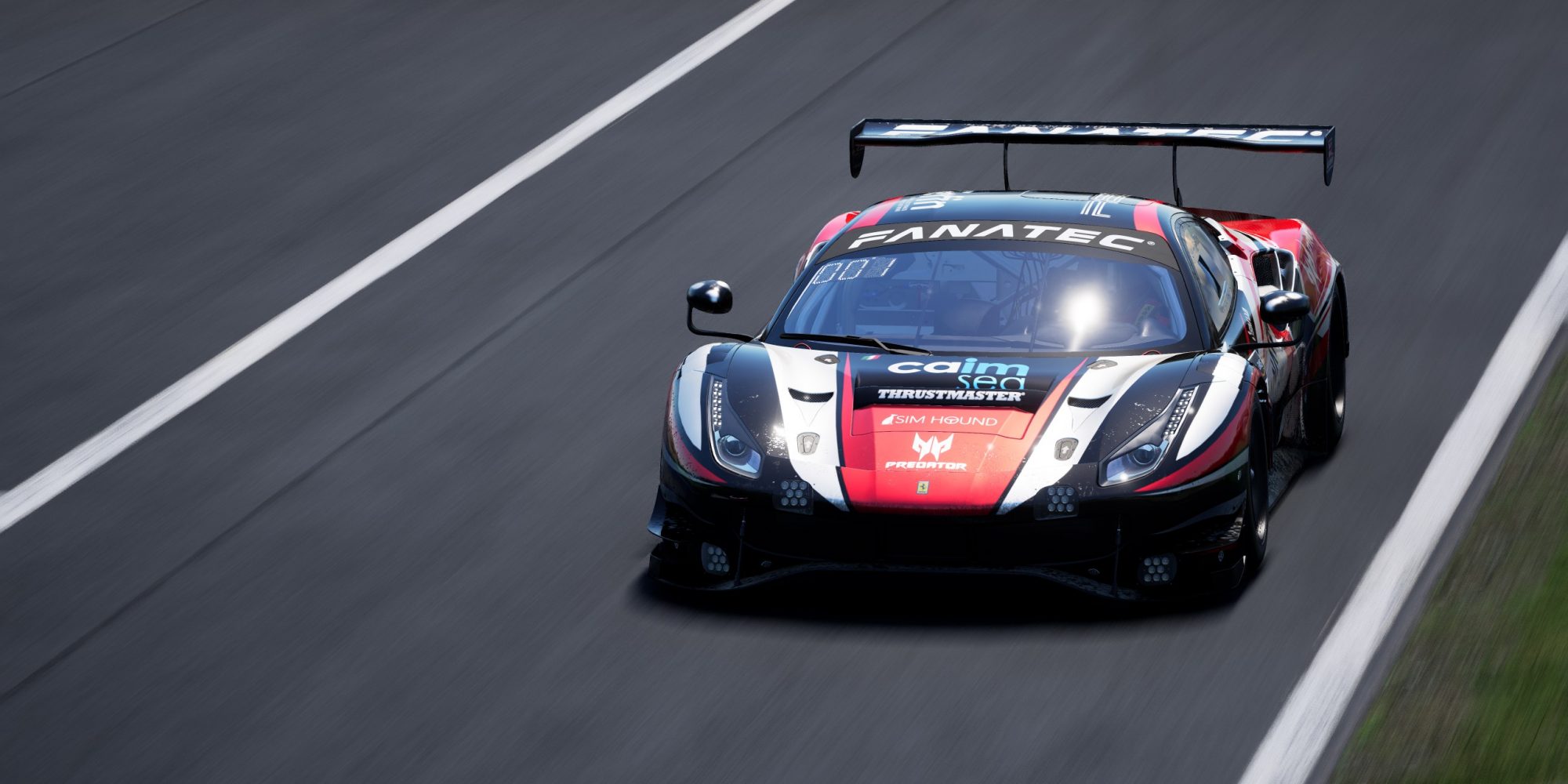 More Female Racers by Thrustmaster Rockets Season 4 started off with an iconic combo – Ferrari and Monza. The 28 teams, divided into Pro, Silver, Pro-Am and Am, made their first official kilometres of the season on the legendary Italian track.

Sara Dove and Andrea Capoccia are the first Pro class race winners in Season 4. After a good qualifying from Dove leaving them second, they didn’t have a good start. Dove was forced to take the paved run-off area in Turn 1, as she slightly missed the first braking point of the race. Coming back on track, she was at the back of the Pro field.

The cautious approach paid off during lap 1 though. GTWR R8G Female Racing #1 gained back a position at Variante della Roggia, as Aloo Gobi found herself facing the wrong way following contact with Mia Swensen. A little off-track excursion by Yvonne van den Berg and a clean overtake on Victoria Thomson exiting Ascari put Dove back in second place. Then, a Drive Through penalty was assigned to race leader Mia Swensen by Race Direction for what happened in turn 3 with Gobi, clearing the way to the top of the standings.

From that moment onwards, it was smooth sailing for the GTWR R8G Female Racing duo. Both Dove and Capoccia looked in complete control and left the lead of the race only when they had to do the two mandatory driver swaps. Car number 177 has been the first to see the chequered flag in Season 4.

Race-winner Sara Dove said before the start of the championship that the Pro class was going to be very close, and she could not be more right. Despite comfortable success in Round 1, the gap between the first three cars was only 8.5 seconds. Quite impressive considering how eventful the hour of racing had been. This also means that we are set to see some close battles in the upcoming rounds at the front, with possible radical changes.

Behind GTWR R8G Female Racing, The CARdashians dressed by G991 and Griphax Engineering #11 completed the podium for the Pro class. While Victoria Thomson and Jonas van Dreuten managed to have an overall clean race, it took an impressive effort for Aloo Gobi and Harry Phillips to recover after that first lap spin. Falling down to P8 overall meant that the duo had to overtake on track multiple Silver cars to come back to the front of the pack.

A similar scenario occurred with the R8G eSports entry. A little mistake in Ascari at lap 1 made van den Berg and Simonini slip down to the middle of the Silver field. As a little consolation, they set the fastest lap of the race overall with a 1.47.151.

It was a different story for the #3 Intruder Racing Team crew, though. After starting from pole position, Mia Swensen and Yves Fild could not recover after that early Drive Through penalty. They finished in fifth place with a 54-second gap to the class winners and will probably want to put this race behind them and focus their efforts on round 2.

It has been a day to remember for the GTWR R8G Female Racing team. After winning in Pro class, they took the top spot in Silver as well. Sophie Aeronwen kept it clean in the early stages of the race and found herself up in P3 overall. Despite dropping a couple of places due to the Pro teams making their comebacks, car #77 finished ahead of everyone else in their class. Esmeralda van der Naald and Stephane Greffet ended close behind with a 5 seconds gap. A strong result for the Emerald Racing – MFR4.

Grabbing the final spot on the podium was another GTWR R8G Female Racing entry. The all Italian lineup, formed by Laura Valenza and Andrea Benedetti, made a huge comeback after starting from last position in class to score 18 points. The middle stint by Benedetti was quite an eventful one and became crucial for the final outcome. The racer led the charge through the field, giving life to brilliant battles with Tony McOffoven, Denise Pope and Kirk Heath in particular, which kept our broadcasting team busy on the SimGrid YouTube channel.

In terms of wheel-to-wheel racing, Silver class has shown promising signs and things can only improve as the championship progresses. In Monza, an unfortunate accident on the straight at the start involved multiple cars, forcing teams to pit for repairs. A situation that created bigger gaps than expected and probably took away the chance to have a few more close battles on track in the midfield.

There has not been a shortage of drama in the Pro-Am class, as the battle for second and third went down to the wire. But it was the Luna Nera crew, formed by Eliza Indriani and Vojta Pavlicek, that claimed the win. The duo took the lead of the class on lap 4 after a mistake by Alina Kovtun, who was leading in the Hakurei Racing Shrine entry up until then, and never looked back.

Strix Racing #316 climbed the order in the first half of the race, managing to get to the second spot. But with just 10 minutes on the clock, Kovtun dived down the inside of Andie the Lab in Lesmo 1. Hedda Rangster did the same a couple of laps later to grab the final podium spot as they approached Variante della Roggia side by side. In the end, Strix Racing had to settle for fourth place ahead of Hitode Racing and the two Wild things Racing crews to complete the Pro-Am field.

Finally, the Am class saw Annalise Riot and Joshua Bouchard of Team Riot – Spice Cake #187 get first place ahead of Team Cake – Angel Cake #139, with Sarah Fair and Rhydian Lloyd-Davies sharing the car.

The opening round in Monza proved to be quite an eventful one. With its high-speed corners, the Italian circuit never disappoints in terms of overtaking opportunities. In two weeks, on Monday the 25th of October, More Female Racers Season 4 will hit the track on another fast track, the legendary Spa-Francorchamps.