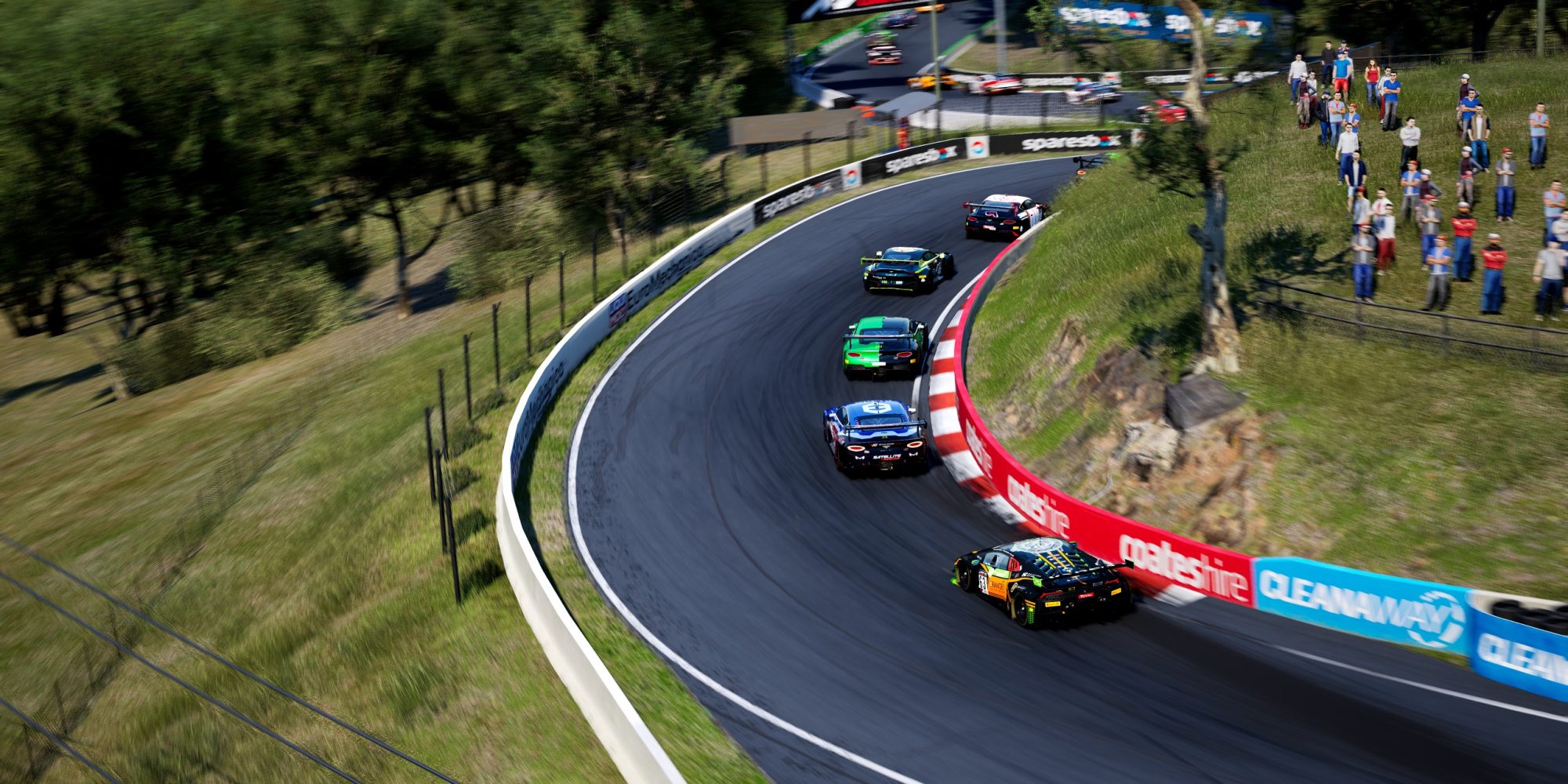 Another 5 races of action down and another season of the SimGrid Endurance Cup is behind us. The series that has become renowned on our platform for providing some of the closest championship battles at the top of the Assetto Corsa Competizione Esports scene didn’t disappoint, so let’s take a trip down memory lane and revisit the five rounds of intense battling.

To begin the new season of the SimGrid Endurance Cup we headed to one of the most iconic tracks on Earth – Spa Francorchamps. Heading to the track was 42 of the most highly skilled Sim Racing teams, as the likes of YAS HEAT, R8G eSports, RennWelten and Williams Esports all battled it out for glory.

Hot out the blocks was R8G eSports, the eventual champions showing no hesitation to get their championship campaign off to a good start. Denis Schoeniger, Jordan Sherratt and Niklas Houben took their Audi R8 GT3 straight to the top in the early hours of the race, as they took advantage of their rivals’ errors and mishaps. However, they wouldn’t be immune themselves, as they too had to fight their way back to the top following a hardware issue. Whilst the other cars in contention battled their issues, R8G eSports exploded onto the Endurance Cup scene in top form.

Spa was a strong indicator of what was to come throughout the rest of the season, as in between the various issues multiple teams faced was some incredibly competitive racing. GTWR, YAS HEAT and R8G eSports all fought it out at the top, whilst the rest of the top ten and top twenty remained just as close across all 6 hours of racing. In contrast to what we expected, Season 3’s contenders weren’t quite so fast.

After an up and down race for YAS HEAT at Spa, who saw heartbreak on multiple occasions with their Richard Mille Porsche outfit and an early race penalty for their Pirelli McLaren trio, they were looking to bounce back at Monza. There’s no better way to bounce back than with a pole position, which is exactly what the YAS HEAT – Pirelli McLaren did. Their eventual victory never really looked in doubt, despite battles with RennWelten eSports, who would finish outside the top 5, around the tyre swap phase and wet weather crossover.

The 6 hours of action was just as good for the sister YAS HEAT Porsche, who in the hands of Maciej Malinowski, Michael Tauscher and Jaroslav Honzik overcame the handling issues they suffered from at Spa, coming home to secure the YAS HEAT 1-2.

Meanwhile, R8G eSports were held back by penalties, crossing the line third at the flag. That was no poor performance, though, as the position would keep them well and truly in the championship fight. Speaking of penalties, GWTR R8G Academy Black were also held back by them, as they spent the race pushing back through the field after a drive-through hit them in the first hour. However, finishing in P4 kept them in the fight.

Round 3 – Paul Ricard – R8G eSports secure themselves at the top

As the Endurance Cup pendulum swung from R8G eSports to YAS HEAT in the first two rounds of the championship, it would indeed swing back the way of the home heroes R8G eSports at Paul Ricard. The back and forth that had taken place so far left the two teams similar on points, but YAS HEAT – Pirelli needed to make this race count. Taking pole for the second time in a row, they were in the prime position to do so.

It would all unravel for them almost instantly though, as, after a tag from the GTWR Audi behind them in turn three on the first lap, they were spun around into the oncoming field and collected multiple times. That was their day essentially over.

Meanwhile, this meant that the YAS HEAT Porsche was free to fight it out with R8G eSports, who both qualified right at the top; the two going toe to toe for laps upon laps. But, it was indeed R8G who came out on top, extending their lead to over a minute by the flag.

The rest of the top ten were all shaken up after the lap one accident, as new faces battled it out at the top. Wippermann Racing, PRIME eRACING and TF Racing all gave us some great action, but in their mirrors was the Dalking Community Aston Martin. Fighting back from qualifying P20, they raced back to the top, coming home second place and securing themselves as contenders.

YAS HEAT – Richard Mille couldn’t make the most of their opportunity at the front, suffering from track limits penalties, a spin on their own and a crash with their sister car. They’d finish P12.

After what was a disastrous race for most of the other championship contenders bar R8G eSports at Paul Ricard, the French outfit had the chance to take the championship with a race still in hand at Kyalami.

Lining up second on the grid, they didn’t necessarily need to win the race to get the title. But, Jordan Sherratt who was at the wheel first showed no reservation, taking the lead from Andrea Capoccia who led GWTR R8G Academy away from pole. Extending a lead of 20 seconds in the first hour, life was comfortable at the front for R8G eSports. Only in the last hour would they come under some pressure, as the Dalking Community Aston Martin that performed oh so well last time out closed the gap. But, it was R8G’s day, as the Aston Martin didn’t get much closer than around five seconds, allowing the trio that had already pulled off an incredible drive to take the race win and with it the title of Endurance Cup Season 4 champions.

The rest of the top ten underwent utter carnage in the early hours of the race at Kyalami, as Simware.Pro looked to disrupt the momentum of the front runners and leave their mark on the standings. However, it didn’t really culminate for them, suffering contact on multiple occasions and not finishing the race.

In the midst of the fight was the Dalking Community car we touched on, which rose above the mayhem to take second place. Behind them, YAS HEAT – Richard Mille could only muster fourth after contact with Simware.Pro left them needing to make up ground. GTWR would bounce back from Paul Ricard to take third heading into the finale.

Mount Panorama was the perfect place for a season finale – the grid of over 30 world-class teams headed down under for one final round of the SimGrid Endurance Cup.

Whilst the top of the championship was all done and dusted, the rest of the positions were far from it. In a race that would be crucial for Dalking Community and GTWR R8G Academy Black, who both had a chance of second place, they needed every point they could get. However, whilst many eyes were on them, Williams Esports stole the show, putting on a dazzling performance in their light blue Ferrari. Taking their first pole of the season, they were quite simply untouchable, putting in lap times over half a second faster than the rest of the grid. Domination would be an understatement, as they rounded out their season with a win by over a minute.

Second place honours in the standings would go to the Dalking Community car, who, after looking out of the fight following a stop-and-go penalty for speeding in the pitlane, fought back to sixth place, as the GTWR R8G Academy Black team stood hopelessly in second. The GTWR team could do nothing but pray their rivals didn’t gain enough positions, but in the end, they missed out by just two points.

YAS HEAT – Richard Mille meanwhile had a race to forget, finishing 20th and only just holding onto their fourth place in the standings as PRIME eRACING took a third place to bring them within 5 points of YAS HEAT.

So there we go, Season 4 of the SimGrid Endurance Cup is done and dusted. A season of racing on a new scale, it was one to remember for teams up and down the grid. From us, we’d like to thank you for your support across the entirety of the season and would of course like to congratulate our Season 4 champions, R8G eSports!