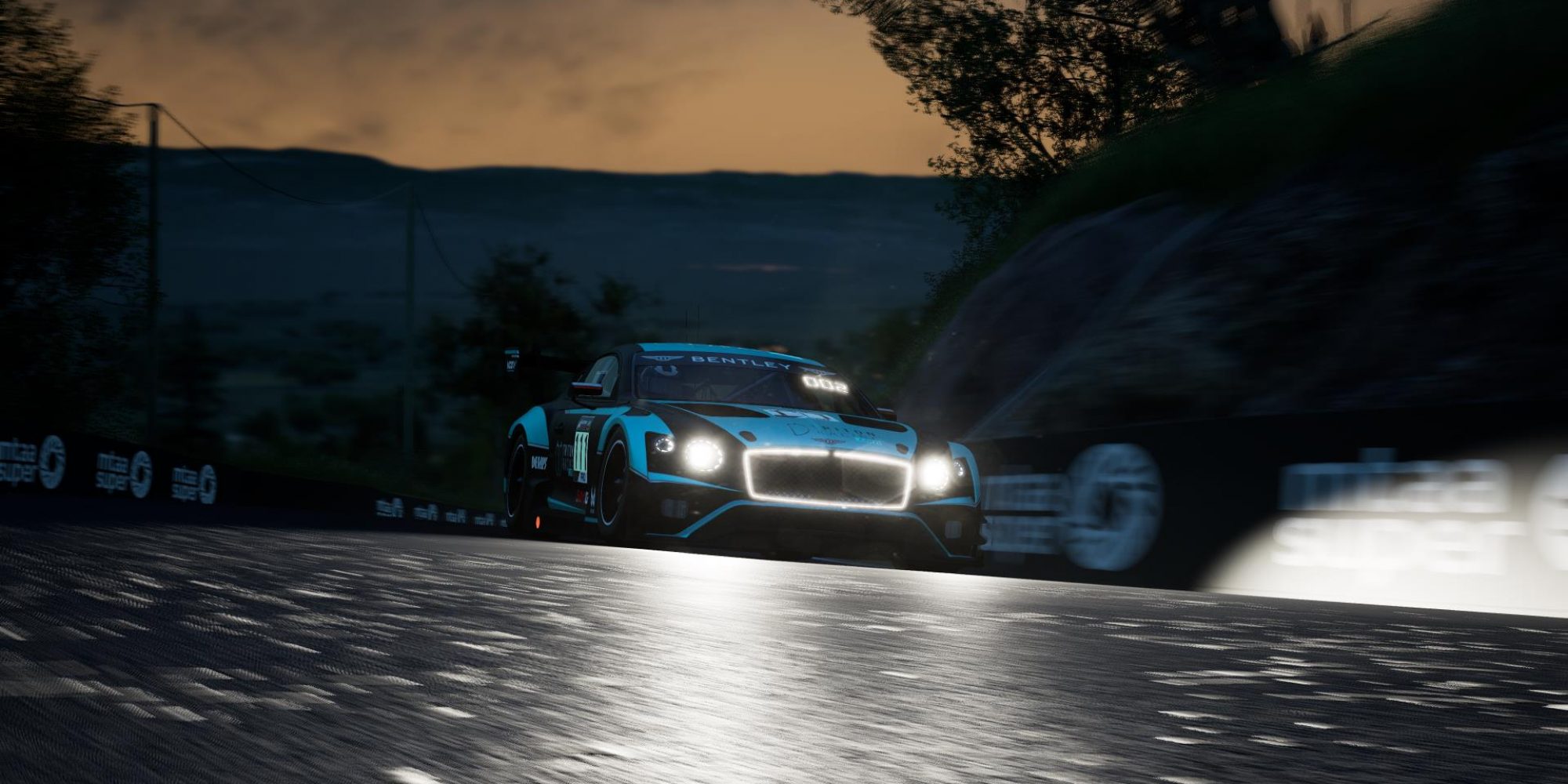 The stakes have never been higher as we return to our grandest event of the year, The Sim Grid x VCO World Cup 2021. 98 cars will battle it out on some of the most iconic tracks in the world throughout 2021 in the pursuit of being crowned World Champions. We head to Bathurst for Round 1 as drivers will race around the sharp features of Mount Panorama. Here’s a breakdown of how the race went.

How the race unfolded

Round one of The Sim Grid x VCO World Cup was set to be one of the most competitive races in Sim Racing history, and with that came a brilliant level of racing. The game really was on for the top ten positions and with that came unmissable competition.

Taking the checkered flag first was DV1 Triton Racing, who was untouched from the very moment they inherited the lead. Until they took the lead after running in P2 since lights out, our pole sitters, GTWR Racing #1, had the race fully under their control, but a mistake around the halfway mark saw them smashing into the barriers, giving them an extra eighty-second pitstop. This destroyed GTWR’s hopes of victory but meant that DV1 Triton Racing was suddenly in the hot seat.

As DV1 Triton Racing put in fast lap after fast lap, the recovery drive was on for GTWR, and the battle for a podium spot would only heat up. Although there were many teams in with a chance of a podium, it was Odox Motorsport and WPS Racing Team who were the likely podium finishers, but a charge from GTWR saw them snatch a podium by the time the flag fell.

Meanwhile, the top fifteen fight was fierce. There were multiple teams moving up through the pack after issues earlier in the race or a poor qualifying, such as YAS HEAT, Triple A Esports, G2 Esports and FFS Racing. This meant that there was battles left, right and centre, keeping viewers hooked at every lap.

Since season one of The Sim Grid World Cup, our grid has more talent than ever, with massive names in all directions. This meant that the battle for the podium would be tighter than ever before, as multiple teams all had a shot at bringing home a big haul of points. Despite the competition, there was one team that wasn’t challenged from the moment they took the lead, and that was the DV1 Triton Racing Bentley.

DV1 Triton Racing took the lead at the midway point after their main rival, GTWR Racing #1, smashed into the barriers after a mistake, but from that moment on, they got their heads down and pushed on into the distance, finishing ahead of Odox Motorsport by eighteen seconds, however, this is still relatively close considering the 12 hours of racing.

Second place was taken by Odox Motorsport, who put in a great showing after qualifying their Audi R8 LMS Evo in seventh. They ran closely with the WPS Racing Team Audi for much of the earlier hours of the race, but due to stint extensions and an overtake into turn one, third became second for Odox. From there, a clean race would see them take this second place, beating GTWR Racing Team #1 due to an extra pitstop caused by their earlier accident.

The final podium spot was claimed by GTWR Racing Team #1. For the first five hours, a third-place seemed to be near impossible as they pulled away at the top of the timing tower, but in the end, third place was a great finish considering their mammoth accident. After the fateful crash, the team pushed on incredibly well to surge through the pack to take a great haul of points, especially when even a top-five was looking tough at one stage in the race.

The stars of the show

The #149 YAS HEAT team started off their weekend with their usual top-end pace, coming into qualifying and placing their McLaren fifth. Unfortunately, the start of the race didn’t go as expected, with an issue ruining their hard work and dropping the team down to 24th place. From here on out, the team were on a recovery mission to keep themselves in championship contention. Throughout the race, YAS HEAT made big strides through every stint, climbing up the field to fifteenth before the midpoint of the race. They continued this monstrous pace throughout the race, finally climbing to the top ten spots, sitting as high as eighth. However, in the final hours of the race, YAS HEAT got into trouble, receiving two penalties that had to be served before the end of the race. Despite this setback, the team held onto a top ten spot and finished the race in ninth.

The #416 The Elvis Gratton Team put in a great performance during the race, being the single Honda currently in the series. The team’s qualifying pace wasn’t enough to get into the super pole shootout as they only qualified in seventeenth place. However, during the race, the team came alive, putting in blistering lap times and coming home with the fastest lap of the race. After only two hours, the Elvis Gratton Team had managed to climb all the way to the front half of the top ten. It looked to be a top-five finish, but a late-race spin dropped the team down one spot to finish in a still mightily impressive sixth place. The #416 The Elvis Gratton Team is for sure one to watch, as their raw place alone kept them in contention all race for those high points-scoring positions.

The #38 Dalking Community Team had a very successful race, climbing a total of twenty-three places over the twelve hours. Their race wasn’t one of too much action, which is positive while racing at Bathurst, as the team quietly climbed the field. They had a few heated battles with the #27 Jean Alesi Esports Academy team, showing that they could challenge any of the top ten teams on track. In the closing hours of the race, the team had reached sixteenth place but then a number of drive-through penalties led to them dropping back to twenty-third. Despite this, the Dalking Community Team made up the most places out of any team and are one to keep an eye on throughout the season.

The teams who fell short

Barely 20 minutes into the race, James Baldwin, from McLaren Shadow, suffered a massive shunt at the hands of Alex Turato of GTWR Racing Team  #2. The #91 Ferrari hit the #55 McLaren sideways, causing Baldwin to crash into the wall. In what looked like a certain DNF, the McLaren Shadow driver made his way back to the pits and repaired all the damage they sustained, coming back out on track a few moments later. They recovered multiple positions later, including a sensational fight with the #199 Mercedes of SG Stern. However, that joy was short-lived, as Veloce Abraham overcooked his overtake in Sector 2 in spectacular fashion, grazing the walls but barely escaping.

There were a few hairy moments, such as hitting #787 of team JAESA Cup at the Conrod Straight in what looked like a certain penalty. And just as predicted, the team were given a Drive-Through penalty for the incident. Their misery was further compounded when they were awarded another DT penalty in quick succession for Avoidable Contact. Things got worse as they were hit with another DT penalty for speeding in the pitlane. However, their resolution must be admired as James Baldwin was still fighting for places even towards the end of the race, as they did their best to recover from their early crash.

Perhaps the star team of Round 1 (arguably), BMW Team G2 Esports were a delight to watch with Nils Naujoks providing a major chunk of the action. The #62 pulled off some sensational overtakes including one on Santoro of the #27 Jean Alesi Academy car. After a very successful stint, when Nils was interviewed, he had a lot of positive things to say. Their race went much better than expected, jumping 10 positions. The BMW is normally a rough car to drive having a very narrow window, and pushing makes the car very dangerous. Hence, the team went for clean and long stints.

The BMW saw a great rise through the ranks but started falling through some positions towards the end after struggles with pace and traffic owing to their old tyres. Despite pitting for fresh tyres, they spun shortly after at the top of the mountain into a wall. They did compromise their tyres but fortunately did not lose any places. In the end, there was some clever bit of trickery involved as the team gave way to LADA Sport for P15 to avoid getting involved with the success ballast.

Who will win at Spa?

As exciting as Round 1 was, we now head over to the next stop in The Sim Grid x VCO World Cup 2021. The second round takes us to the beloved Spa-Francorchamps for a fiery 24 hours of racing. GTWR came out as outright winners in this spectacle last season but can they repeat that feat again? Only time will tell. Make sure you follow all the action at The Sim Grid. If you need to catch up on some essentials for your sim racing experience, head over to Coach Dave Academy. Catch you next time!