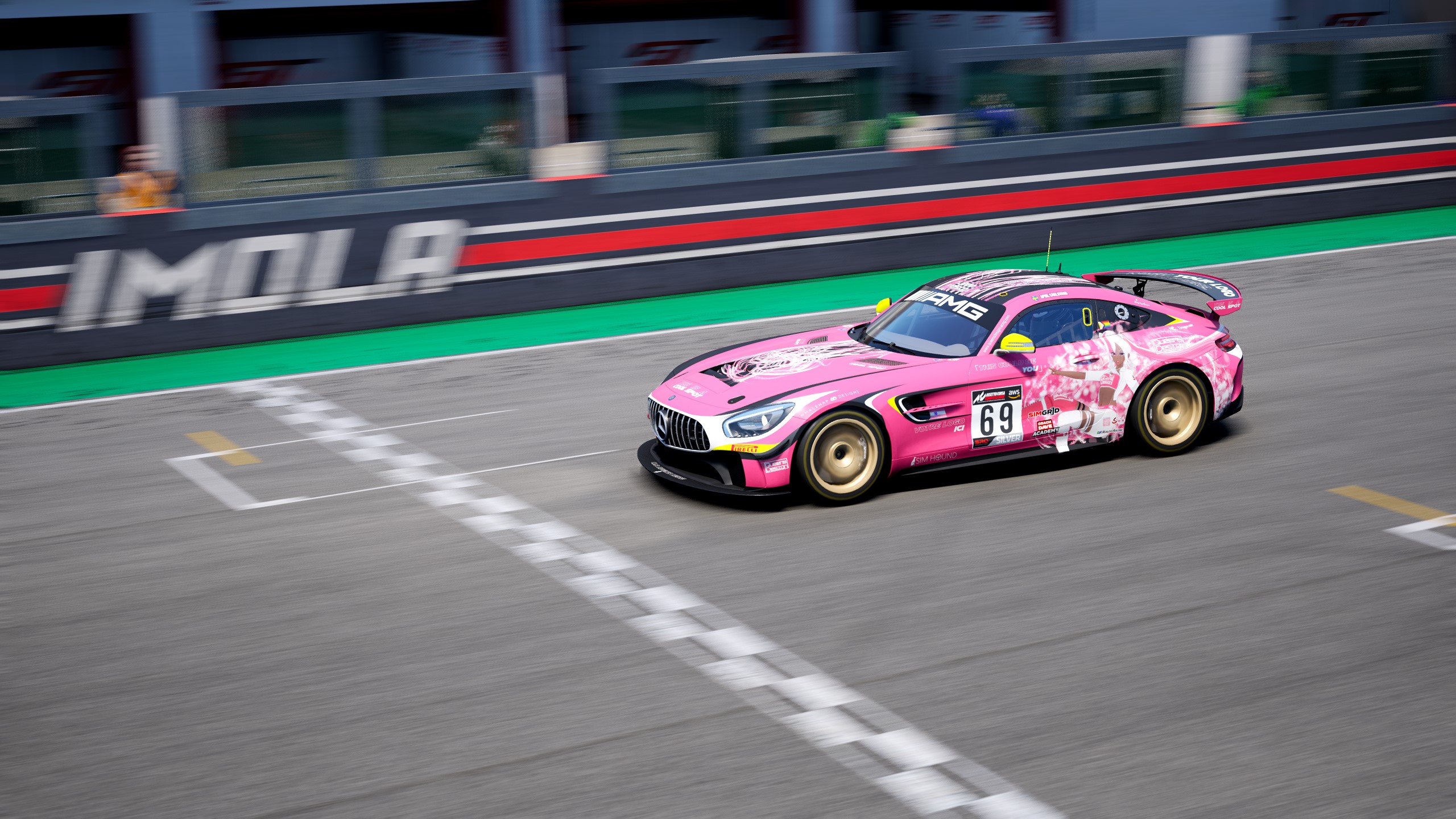 Heading towards round 3 of More Female Racers Season 5 we saw some adjustments to the categorization of Silver and Am entries. The overhaul did not change much for the Silver front runners, while it made a big difference in Am. But the breaking news in Imola comes from the Pro class. Aloo Gobi managed to win race 1, breaking Aenore Rose’s streak, who still stays in the commanding seat as we approach the second half of the season.

If one had to represent the Pro class in Season 5, there would definitely be the car of Aenore Rose continuously chased by Aloo Gobi. Once again, the pace of the two racers definitely looked alike. And with their lap times being so close, qualifying has been the difference maker so far. Aenore Rose was fastest by one-tenth of a second, setting a 1.50.037 and claiming pole position for the third time in a row.

In race 1 the gap between the two rivals stayed below the second, but Gobi never really had the chance to go for a move, differently from what we saw in the previous two rounds. Then, in the final minutes, Rose was able to build a small, but comfortable gap which secured the win – but that was an ending that was later overthrown by Race Control. A 5 seconds post-race penalty handed P1 over to Aloo Gobi, who finally celebrated her maiden win of the season, in albeit anti-climactic fashion.

With the penalty dished out post-race, in the second half of the evening once again it was Aenore Rose starting out in front. Gobi tried to be more aggressive from the get-go, going for the outside at Tamburello. Rose did an excellent job in covering the inside line and was flawless for the entirety of race two, claiming her fifth win of the season.

Sara Dove completed the Pro standings, making the best of the absence of Thomsen and Hazel by collecting two P3. With three rounds to go every point matters.

Queens’ Design comes out strong from a mixed Silver pack

The changes applied to the categorization did not impact much on the Silver class, but there has been a surprise at the front compared to rounds 1 and 2. Following her absence at Brands Hatch, Jenny Camugli was fastest in qualifying, converting the pole position into a win in race 1. Her leadership was never in doubt, while things got heated behind her.

At the start of the race, Esmeralda van der Naald managed to move up into P2, ahead of the Queens’ Design duo formed by Ruby Acosta and April Carlsvard. The fight for the second spot did no favours to the racers involved, as Camugli managed to easily get away. But it definitely kept things interesting from a spectator’s point of view. Acosta took the place back in the early stages of the race, before Carlsvard got past around the halfway mark with a good old switchback. The overtaking manoeuvre started at the penultimate corner and was completed on the final straight. In the end, van der Naald had to settle for P4.

The podium from race 1 spiced things up in the second heat as well. This time around, Camugli was not able to pull away from the field. Carlsvard, and especially Acosta, threatened the leading car for the majority of the race. But with less than 5 minutes on the clock, Camugli picked up a costly drive-through for exceeding track limits.

A penalty that basically gifted a 1-2 to Queens’ Design, Acosta took the flag right in front of Carlsvard. Camugli fell down in P11 and opened up a spot on the podium, which was filled by van der Naald. The Dutch racer has been superb in keeping at bay Sophie Aeronwen, who moved up to P4 with a final lap overtake on Denise Pope. The three cars took the flag separated by less than one second at the end of a nail-biting fight.

Louise completes last-to-first challenge, Witcher comes out on top of AM class

How many times have we seen a content creator doing a last-to-first challenge to entertain spectators? Well, Lisa Louise completed it in race 1 at Imola but did not definitely plan it.

Unable to record a proper lap time in qualifying, Louise started at the back of the pack. Patience and strong AM pace were key factors for her charge through the field, which ended with a win in class.

In qualifying, debuting Stryxnine Pulsatrix took by storm the Am field, setting the best time, even faster than most of the Silver field. But her inexperience in the series emerged in the race. While she was comfortably leading the race, Pulsatrix spun in turn 1 as she went too aggressive on the kerb.

The other runner-up of the race, Eris Aphelion, hit trouble too. At first she was involved in an accident in turn 1, before clashing with Eliza Indriani at Variante Alta. This paved the way to Lisa Louise, who crossed the finish line ahead of Witcher by a half of a second. Anna Wintels completed the podium in P3.

After missing out in the first 30 minutes, Witcher got instant redemption in race two by grabbing the final win. Despite an impressive start from Roberta Lesca, going from P4 to P1 in the span of 5 minutes, Witcher took the lead of the race when Lesca was involved in a clash at Variante Alta. Cosmo Marsh claimed provisional P2, but could not do anything to stop the comeback from Lesca, who finished in second ahead of Marsh. After a flawless win, race 2 quickly turned into a nightmare for Louise. Coming out of the final corner, she lost control of her Mercedes-AMG GT4. Indriani and Pulsatrix were involved in the unfortunate accident too, compromising their chances for a good result.

Rose and Acosta lead Pro and Silver, Marsh and Witcher are tied on top of AM standings

Before we get into the second half of the season, it might be worth taking a look at the standings. In doing so, we must always consider the drop round rule, which might change things quite effectively going ahead. With 5 wins in 6 races, Rose clearly sits on top of the Pro standings, with Aloo Gobi trying to hang in there and keep her chances alive.

Silver class is definitely more balanced, but once again we find on top of the standings two Queens’ Design racers, Ruby Acosta and April Carlsvard, who tallied 75 and 70 points respectively so far (if we already consider a drop round). Sophie Aeronwen is close behind at 67, while there is a slight gap to Denise Pope, who sits in P4 with 50 points.

The Am class is even more levelled, especially following the latest changes made to the field. Cosmo Marsh and Selene Witcher are separated by two points (70 vs 68), with Eris Aphelion closely following at 63. Behind them, there is a nice group of outsiders formed by Lisa Louise (52), Roberta Lesca (50) and Annalise Riot (49).

More Female Racers will be back for more in less than two weeks, on Monday, 5th December at 20 CET. The championship is coming alive. Make sure to follow SimGrid on YouTube to not miss the action.